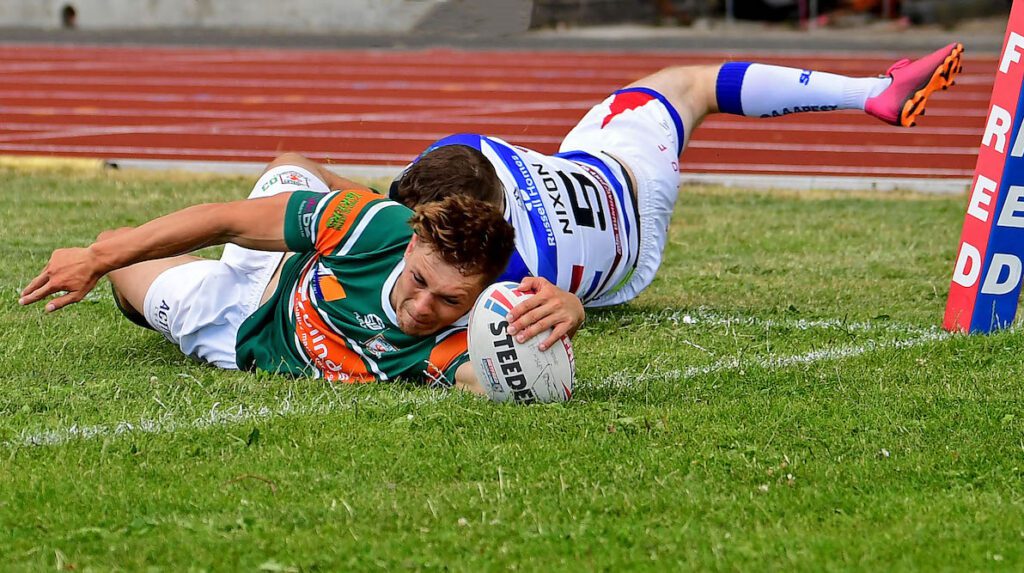 Hunslet’s second half fightback against a strong Rochdale Hornets side was commendable at the South Leeds Stadium, but they will be disappointed they let the Lancastrians get into a 16 point lead in a one-sided first quarter.

From 6-28 down on the hour mark Hunslet fought back to 24-32 on the final hooter, but Rochdale coming out of the blocks the livelier gave them the edge in a thrilling contest.

Having players on loan Hunslet took time to gel, and losing Kieran Moran on Thursday evening and Cole Oakley early in the match wouldn’t have helped.

Hornets had taken the lead on only the 2nd minute when Gregg McNally touched down and 3 minutes later a lovely inside ball had sent Aiden Roden over near the sticks. 0-10 and Hunslet had yet to touch the ball.

The penalty count was very much in Rochdale’s favour, and after the second 40/20 of the afternoon Rob Worrincy waltzed over for an easy try after Hornets had numbers from the scrum. 0-16

It looked like a long afternoon for Hunslet, but they regrouped and forced their own attacks. Jake Anderson miss-handling near the line and Josh Jordan-Roberts being held short.

After slumbering early on Hunslet now awoke and deserved a try before half time when Jimmy Watson followed up a Jake Sweeting kick to score after Jordan Syme had won a penalty for ripping.

Sweeting converted and it was 6-16 going into the break, but in added time Hunslet faced another blow when influential forward Ethan O’Hanlon had to be carried from the field.

The second half started with Hunslet on top, and the crowd became angered when Rochdale got away with what looked like a blatant trip on Wayne Reittie.

But it was a Rochdale penalty that added the next points, Lewis Sheridan converting easily to give the visitors a 6 -18 lead.

For 15 minutes both teams wrestled before eventually Lewis Sheridan fed Zac Baker to score and Rochdale stretched their lead to 16 points. 6-22

On the hour mark Sheridan again was provider as this time Brearley touched down for Hornets and at 6-28 the game was effectively over.

Ollie Burton nipped over from acting half-back on 66 minutes for Hunslet before quick Rochdale passing saw Cobi Green add another for the Lancastrians. 12-32.

Bringing in 4 loan players for this match due to injury was always going to unbalance the home side. Patrick Walker who has been out of the game for 2 years and Jake Sweeting who also hasn’t played in a while were rusty at first but started to come into their own in the last quarter leading the Hunslet fightback.

Rochdale had Paul Brearley sin-binned for holding Jimmy Watson down before Ollie Burton provided the pass for Harvey Hallas to score on 78 minutes. Jake Sweeting adding the extra’s 18-32.

It looked a lost cause for Hunslet but with plenty of added time they again came close to scoring to make it an interesting last few seconds. But Rochdale had that earlier cushion to fall back on and at the hooter were deserved winners with Rangi Chase and Lewis Sheridan outstanding.

Hunslet cannot be too disappointed after such a slow start and with Jimmy Watson, Wayne Reittie and Harvey Hallas all having fine games they will fancy picking up wins in the next 3 games against Cornwall, West Wales and London Skolars.

Having said that the Cornishmen picked up their first victory of the season this week and with 4 ex-Hunslet men in their ranks it will be a tough trip down to Penryn next Saturday.

Hunslet are next at home on Sunday 10 July 10 when they host the West Wales Raiders.

Photo: Jack Render reaches over to score by Paul Butterfield