Hunslet’s Betfred League 1 campaign for 2022 got off to a winning start at a sunny New River Stadium in North London as they saw off a spirited London Skolars side.

It was a game of two halves really for the Parksiders who were a bit ring-rusty after a month’s break since their last outing at North Wales Crusaders in the Challenge Cup.

Missing Captain Duane Straugheir (out with a hernia injury) Hunslet had to soak up some early Skolars pressure, but took the lead on the 6th minute when a Jack Render kick was followed up by Joe Summers to score. 0-4

Hunslet looked livelier with the ball, but unforced errors gave London field position from which they were able to get at Hunslet’s line. Having blown a couple of chances London finally broke the Parksiders defence when Jonathon Bell snuck over from close range. 6-4

The problem for Hunslet was they hardly ever completed a set in the first half, so it was constant pressure from the strong running Skolars forwards. Having said that, Hunslet’s line defence was good, and on 25 minutes a fortunate chip kick would have led to an almost certain try had it not been for quick thinking by fullback Jimmy Watson who read the play and blocked a pass mid-flight.

On a rare foray into the Skolars half Hunslet got over ambitious and a loose pass was intercepted by London’s Aaron Small who raced 70 yards to score despite being tailed by three Hunslet defenders. 10-4

Although London didn’t threaten again in the half, Hunslet could not mount a serious attack and trailing 10-4 at the break Coach Alan Kilshaw would have had some harsh words for his men.

The second half was like a different game. Only one minute in and Jack Mallinson dummied his way close to the line. When it looked like he was tackled he wriggled free to score and all of a sudden we were all square. Mallinson converting his own try 10-10.

The large try areas nearly proved costly for Hunslet when a London grubber kick wasn’t cleared. But luckily the ball was faster than the man and went dead before a London hand could touch down.

Hunslet came again and only a poor pass stopped Kiedan Hartley going over, moments later a Jordan Syme break came close to a score, but he couldn’t get the final pass away.

Hunslet were now on top, but the tide turned more in their favour when London had a man sent off for a head tackle on Jason Mossop. The Rugby League have now clamped down on any tackles around the head this season after serious cases of concussion, and so far it has been fairly controversial.

No complaints on this occasion though, and happily Mossop continued and on 66 minutes sharp passing after a repeat set gave him the opportunity to score and put the Parksiders in front 10-16.

There was further woe for London on 70 minutes when Hunslet’s Jack Render, trying to get the ball away, was upended in a spear tackle and the home side were reduced to 11 men for ten minutes.

With the two man advantage Hunslet now threatened at every turn. Rian Rowley went close before David Gibbons dummied his way over under the sticks. 10-22

Coming off the bench Ethan O’Hanlon caused havoc in the Skolars defence, and after one of his breaks Harvey Whiteley found a huge gap to sprint through to score 10-28.

Jack Mallinson converted and could be happy with his day picking up a try and four conversions whilst Jimmy Watson and Jason Mossop had good games in the backs.

The Parkside Ex-players association Man of the Match chosen by the players went to Ethan O’Hanlon who always impresses off the bench, but Harvey Hallas was also a stand out in the pack.

Coach Alan Kilshaw was not happy with his side’s retention in the first half, only completing one set, but conceded their line defence was good. He must have liked what he saw in the second period though and although there will be stiffer tests to come it’s a win away from home.

Hunslet play Oldham at the South Leeds Stadium next Sunday (3 April) when they will officially open the Geoff Gunney Stand. 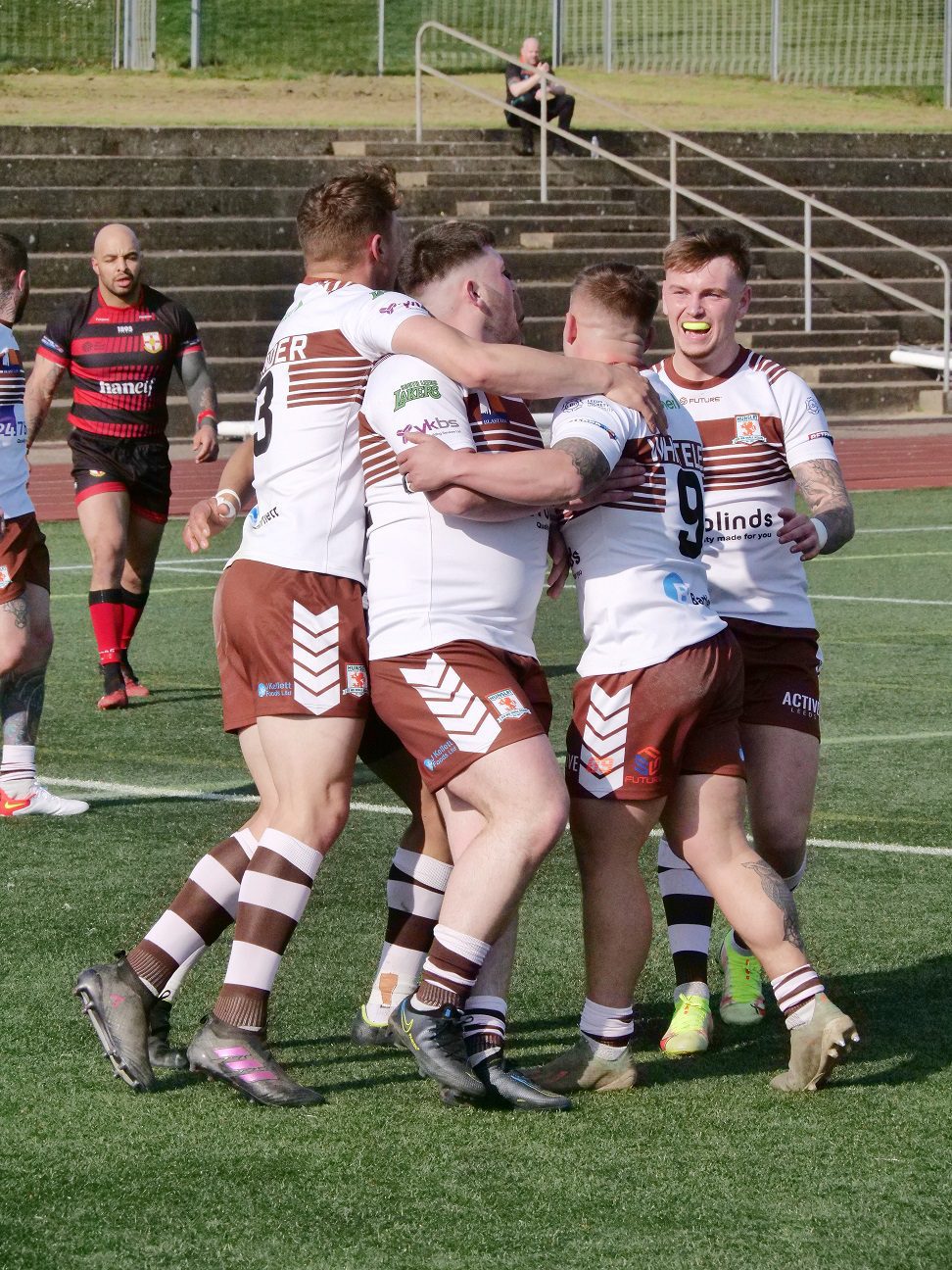