Hunslet’s wobble on the Wirral 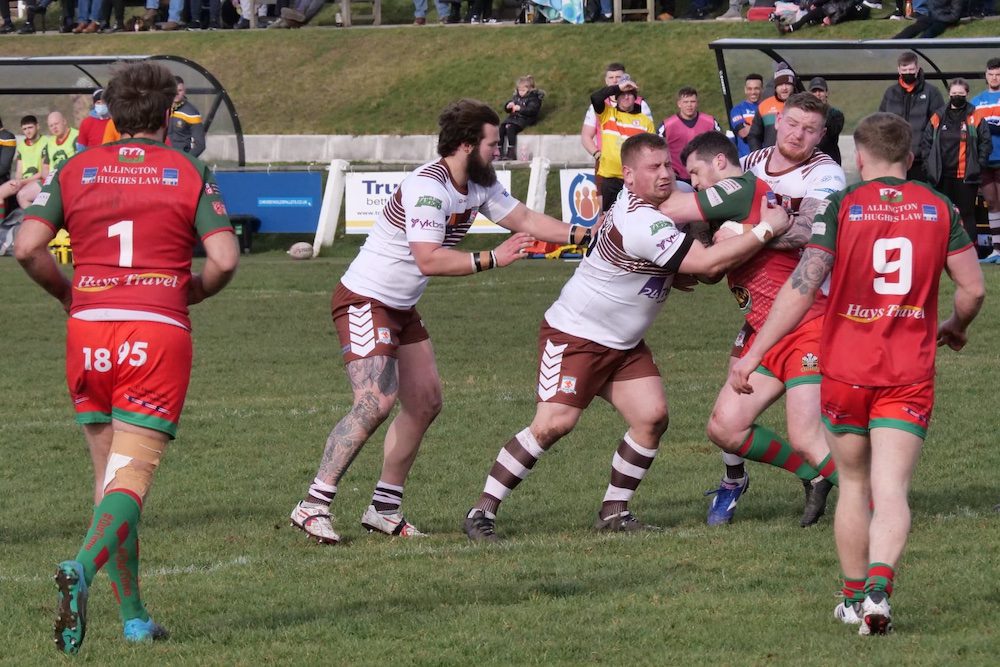 Hunslet’s good start to the season came to an end at Paton Field home of Caldy RUFC on the Wirral as they were knocked out of the Challenge Cup by a determined and well drilled North Wales Crusaders side.

The Crusaders, who knocked out League One joint favourites Swinton in the last round, could not play at their home ground in Colwyn Bay because of Welsh Rugby Union commitments. The change of ground attracted a smattering of local Rugby League fans all cheering on the Welsh boys.

Hunslet, having only conceded six points in each of their first three games found themselves 6-0 down after only three minutes when on the last tackle of a Crusaders attack the ball was dabbed through for Gibson to follow up and score.

Without any stands the field was open and Hunslet played the first half into a strong wind. The Parksiders slowly got a foothold in the game, and after forcing a drop out shipped the ball quickly to the left for Jason Mossop to force his way over. 6-4 after 12 minutes.

But it was the Crusaders who looked the hungrier, and after a loose pass had gone to ground, broken play meant North Wales could attack down the left side (from where they had joy all the half). Lightening passing saw Eckley stroll under the posts and the ‘home’ side lead 12-4 quarter way in.

Hunslet’s line came under pressure again as they could not get up the field despite strong running from Jordan-Roberts, Stableford and Summers, and on 34 minutes after a controversial knock-on decision was given against Hunslet, Gibson registered his second of the afternoon to give Crusaders the lead 18-4.

Hunslet needed a try before the break to stay in the contest and after a penalty were given the opportunity. Ethan O’Hanlon carved a path through the Crusaders defence before Jack Mallinson’s grubber kick was pounced on by Jack Render. Joe Sanderson couldn’t land the conversion and Hunslet trailed 18-8 at the break.

With the wind behind them in the second half Hunslet needed an early score to change the tide of the game. A Crusaders mistake from the kick off gave them an opportunity. But Hunslet’s attack lacked spark and the Crusaders defence was good.

Without that early score the second half settled into an arm wrestle, both teams trying to grind each other down. But as the minutes passed it looked as if North Wales would hang on for victory.

A break eventually came for the home side after 70 minutes through the middle and excellent passing ended in a fine try for Hazzard under the posts to make Billsborough’s conversion easy. 24-8

Hunslet’s cup run had ended and the day got worse as Gibson sold a huge dummy to complete his hattrick and North Wales made sure they were in the hat for the next round of the cup. On this form they look to be a good bet to do well this season and it will be a tough trip to Colwyn Bay in July.

A tough day at the office for Alan Kilshaw and his young team. Hunslet lacked a bit of spark today and didn’t play the conditions well. But with Whiteley, Paga and Jordan-Roberts again looking lively they will fancy that this team could gel and be a real threat in League One.

The League One season starts away to London Skolars on 26 March.