In-form Thunder aiming to rumble on in play-offs 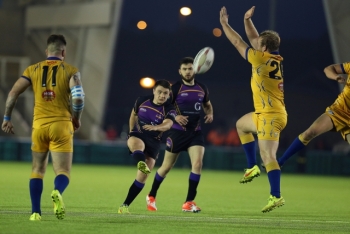 Gateshead Thunder play-off hero Matty Beharrell insists the North East club have yet to produce their best form in the Kingstone Press Championship One promotion race, which continues with a trip to Hunslet Hawks on Sunday (3.00pm).

A week after the stand-off’s extra time drop-goal secured a golden-point 15-14 win against Hemel Stags, Beharrell and his team-mates will head for the South Leeds Stadium with high expectations.

Victory this weekend would leave Gateshead just 80 minutes away from an unlikely tilt at the Championship One title but Beharrell has little doubt that they have what it takes to put the perfect finish to a season of rich progress.

“It’s going to be a tough game at Hunslet on Sunday: they are big, physical and experienced team with plenty of good players in their side,” said Beharrell.

“If we carry over this confidence to their place and play like we know we can play then we can beat any team on our day.”

Beharrell, who is dual-registered with Gateshead from First Utility Super League club Hull KR, believes that things are looking up for the team under new head coach Stanley Gene and that reaching the play-offs is only the start of things to come for the club.

“I’m really enjoying my rugby at Gateshead and they’re a great bunch of lads to play with which helps,” he said. “We’ve done better than everyone expected us to do this season.

“The game against Hemel Stags was a fantastic experience because it was part of a double-header. Our game was straight after Newcastle Falcons played London Irish and it was pleasing to see a lot of their fans sticking around to cheer us on too.

“There’s a real buzz around Gateshead at the moment and it’s exciting times for the club. With Stanley Gene being here and Newcastle Falcons taking over hopefully the good times will return.

“Stan’s put the structure in place and we all know what is required of us at the weekend. Anything is possible and fingers crossed it’ll go our way.”

The winners of Sunday’s elimination semi-final will be away to the losers of York City Knights v Oldham next week.

Tickets for the Kingstone Press Championship One elimination semi-final, Hunslet Hawks v Gateshead Thunder at South Leeds Stadium on Sunday September 21 (3.00pm) can be purchased on the day from as little as £12 for adults, £8 for concessions and £2 for children (under-16).