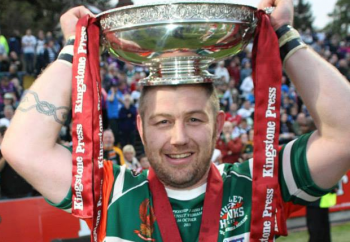 Hunslet Hawks can today announce that captain David March has played his last game for the club.

March joined the club from York City Knights to join twin brother Paul at South Leeds in December 2009 and led the club to the Championship One ttle in 2010.

His final act was lifting the Championship One Grand Final trophy at Headingley last weekend capping a memorable 5 years at the club.

He made 24 appearances for the club in 2014 scoring 8 tries and kicked 33 goals, Marchy was also close to being named Man of the Match in the final.

Director of Rugby Darren Williams said “In many ways it’s a sad day for the club as David has been ‘Captain Fantastic’ in the 5 years service he has given the club, it’s never being about money with David he just lives and breathes the game. I know he’s turned down better offers over the last 3 years to stay at the club. He’s an inspiration leader on the pitch and he earns his respect by what he does during those 80 minutes.”

“He’s inspirational and will be near on impossible to replace but we must move on now. I knew he was contemplating his future if the club was successful in achieving promotion and to his credit he’s decided it might be one step too far for him playing in the Championship. He now has one more decision to make regarding if he wants to continue playing at Championship One level and whatever he decides all at the club wish him and his family nothing but good wishes for the future.”

On making his decision March added “I’ve really enjoyed every bit of my time at the club and have some great memories of trips to Toulouse and Wigan to remember for the rest of my life as well as having two Championship One medals to show for it.”