James Coyle on his return to the club as Head Coach 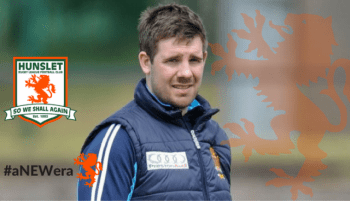 James Coyle caught up with our Media Executive Liam McCarthy to discuss his return to the club as Hunslets’ new Head Coach.

New Hunslet head coach James Coyle has admitted he is excited to be back at South Leeds Stadium in his new role, believing the club have progressed since his departure at the end of 2014. Coyle’s arrival was announced earlier in the week, following the club’s decision not to offer Matt Bramald a new deal for 2017.

“There’s been a lot of changes since I was last here and I’d say the majority of those have been for the better. There’s a new chief executive, Darren (Williams) has got a more focused role and is able to pay attention to the finer details of his job now. There’s a new marketing manager and a new commercial manager in Josh (Parkin) so the club is moving in the right direction and it’s exciting to be part of it.”

The excitement surrounding the club ahead of 2017, with the re-brand and a new kit deal announced over the past few weeks, has created a real buzz around Hunslet and although Coyle admits it’s an exciting time to be re-joining, he cites his affection for the club and relationship with the people involved at the club as real motivating factor in his decision.

“To be honest I probably would have never left  the club if it wasn’t for Steve Deakin. I’ve got a really good relationship with him, we’ve known each other 10 or 11 years now and every time we’ve worked together I’ve really enjoyed it. The opportunity came up to work under him as assistant at Whitehaven and that was literally the only reason why I left Hunslet. The club was always good to me and I enjoyed my time here, even though it was hampered a little by injuries towards the back end of my career. I don’t think the re-branding and the kit deal and all of that played a massive part but it is more exciting that that’s going on at the same time.”

Coyle has persuaded Deakin, a man who has a wealth of experience in the game, to join his coaching team at the club, continuing a partnership that has developed over a decade. Mark Cass remains in his role at the club too, and Coyle admits the fact all three know and have worked with each other before will be beneficial.

“I think the fact that we’ve all worked together before is a plus. Mark was Deaks’ assistant in 2008 at Oldham when I was playing there and we made the grand final. Me and Deaks have worked together a lot and obviously I was back with Mark when I was here, so the team know each other pretty well. We’ve got a couple of new faces to join in too like conditioner Dave Bell and I’m hoping that we’re all singing off the same hymn sheet and we’ll all buy into the same idea’s and beliefs in what we want to achieve. It’s going to be a tight knit coaching group and we’ll all have each other’s back.”

Coyle admits that one of the main aims of the coaching team is to create a positive culture within the playing squad. The new coach admits that he is taking over a talented group, and that he won’t be looking to bring players in just for the sake of it.

“I think we have to look at retaining the players who have shown they deserve to stay at the club and want to move forward with us. I think the squad as a whole is really, really strong and the location is great for attracting players. Even if the budget is a little tight we’ve got other benefits about being part of Hunslet, it’s an attractive place to come.”

During 2016, Hunslet showed in patches just what they were capable of, running unbeaten Toulouse all the way a few weeks ago and comfortably dispatching York City Knights during the Super 8’s phase. However, the inconsistency of the team’s performances was ultimately their downfall. Coyle admits consistency is important at any level, but that creating a good culture at the club was key to being successful.

“I think at any level you’ve got to be consistent in what you do, day in and day out. The big thing we’ve spoken about as a back room staff and with the Chief Executive and the Director of Rugby is the culture of the club. We want that positive culture throughout the club from top to bottom and that will filter down to the team, creating a good work ethic. That’s going to be our foundation. If we get our work ethic right and our training is good then we will be more consistent in the plays that we make on the field and the decisions we make during games. That will ultimately make us a better side.”

Coyle has already met with the club’s board regarding a three year plan, but he won’t be drawn into setting any goals for 2017 until he assesses the group during pre-season. He admits that next season will be primarily focused on creating a culture and building foundations for the future, but he is also determined to send out a team with a winning mentality.

“I don’t think we’ll set any goals until we get into pre-season. We have to see where we’re up to in terms of the development of our players. Then we can see what we’ve got to work on and how long we think it’s going to take to get the group to a standard that we’re happy with. Internally, the board have set the benchmark as to where we want to be. This year is probably more about improvement and creating a good culture and setting a foundation that we can build off. Should we develop quicker than the board is anticipating then that’s all well and good and that will be welcomed. We’ll go into every competitive game to win, we’ll prepare like we’re going to win and we’ll train like we’re going to win. That’s part of the building process, creating the winning culture and that preparation in getting ready to play, what you do away from the club and what you do when it’s coming up to games. We’ll be doing that all year and that’s something that will stand us in good stead going forward.”