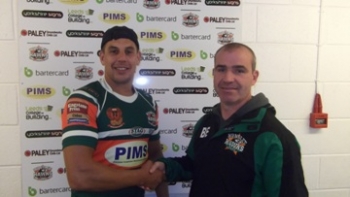 Hunslet secured the services of hooker James “Buster” Feather from Keighley on a one year contract which comes into effect on 01 December 2014. We believe Buster will be a key player for us in the Championship next season.

He signed a contract with the club for 2015 on the 13th October, however on the 21st October we received an email from James asking to be released from this agreement citing the fact that he regretted his decision. This was just 3 hours after speaking with Head Coach Barry Eaton where James explained just how excited he was about this new challenge.

This was further supported with an article in the Telegraph & Argus on the 16th October where James explained why he was joining Hunslet “But if I’m truthfully honest, I haven’t been happy at Keighley for a year. Some people might have seen that on the field because I’ve just not been enjoying my rugby. The rugby at the club hasn’t been the same for probably the past twelve to eighteen months, so I’ve struggled to really hit the potential that I know I’m capable of. But I know that Barry gets the best out of me because he’s had me here at Keighley for five years previously. I wanted a new challenge and going to Hunslet with Barry was a no-brainer. Hopefully I can go there and start to enjoy myself again.”

Additionally the Club has been made aware of a press interview with Cougars chairman Gary Fawcett highlighting the fact that James would now like to return to Keighley though correctly pointing out that this is a matter for Buster to resolve. We can confirm however that we have made Keighley coach Paul March aware that unless the Cougars make an official approach and agree appropriate compensation then we expect James to honour his agreement with Hunslet.