Johnson joins on loan from the Rams 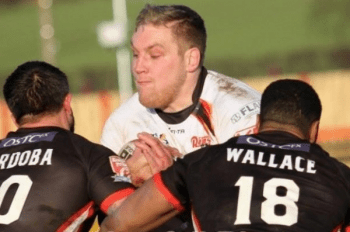 Hunslet Hawks RLFC can announce that prop forward Zach Johnson has signed on loan from Dewsbury Rams for an initial month.

Johnson played in the Championship for Swinton in 2014 after signing from Shaw Cross and toured Australia with Barla in 2013. He joined up with the Rams ahead of the 2015 season and his blockbusting style earned many plaudits.

Director of Rugby Darren Williams said “We were looking a little light for middle units as we have just released Jack Pickles due to work commitments and it looks like Jay Leary is also struggling with the same issue added to the fact Michael Haley went to hospital at half time of Sundays game, were hoping it’s just precautionary with Michael as he took a whack to the face in a heavy collision.”

“Zach will add plenty of size and will be a really useful recruit as we kick off League 1 at Rochdale this weekend. Mark Sawyer & Glenn Morrison have been very accommodating in allowing Zach to join us and the move will be of huge benefit to all parties as Zach needs some game time and Dewsbury need him playing regularly at a good standard.”