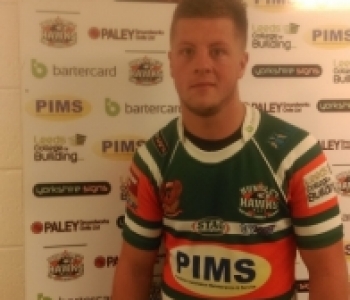 Hunslet Hawks have signed 19 year old half back Jordan Gale from Bradford Bulls on a 1 year contract.

Jordan is a former Leeds Rhinos scholarship player having played his junior rugby at Middleton & Oulton. He is related to current Super League star Luke Gale and his family are steeped in Rugby League.

Hawks Director of rugby Darren Williams said “Jordan is a goal kicking half back who lives in Middleton, he was looking for an opportunity to progress his career and was keen on testing himself playing open age semi professional rugby. He is keen and hungry to grasp this opportunity with both hands and is really looking forward to wearing the Hunslet shirt and ripping into pre season next month. It’s been our policy to encourage as many local lads to play for their community club as possible given that were now a supporters owned club & the fact that we need to engage with & be at the heart of the local community to increase our support base.”

On signing Gale added “I’m pleased to be on board at Hunslet, it means that something extra special with me being a local lad I can’t wait to wear the famous Myrtle, Flame & White.”

Williams also revealed that utility back Lee Brickwood has extended his stay at the club by penning a 12 month contract extension for 2015. Brickwood made 20 appearances for the club in 2014 scoring 6 tries.