Liam’s loving it at Hunslet – despite the coronavirus! 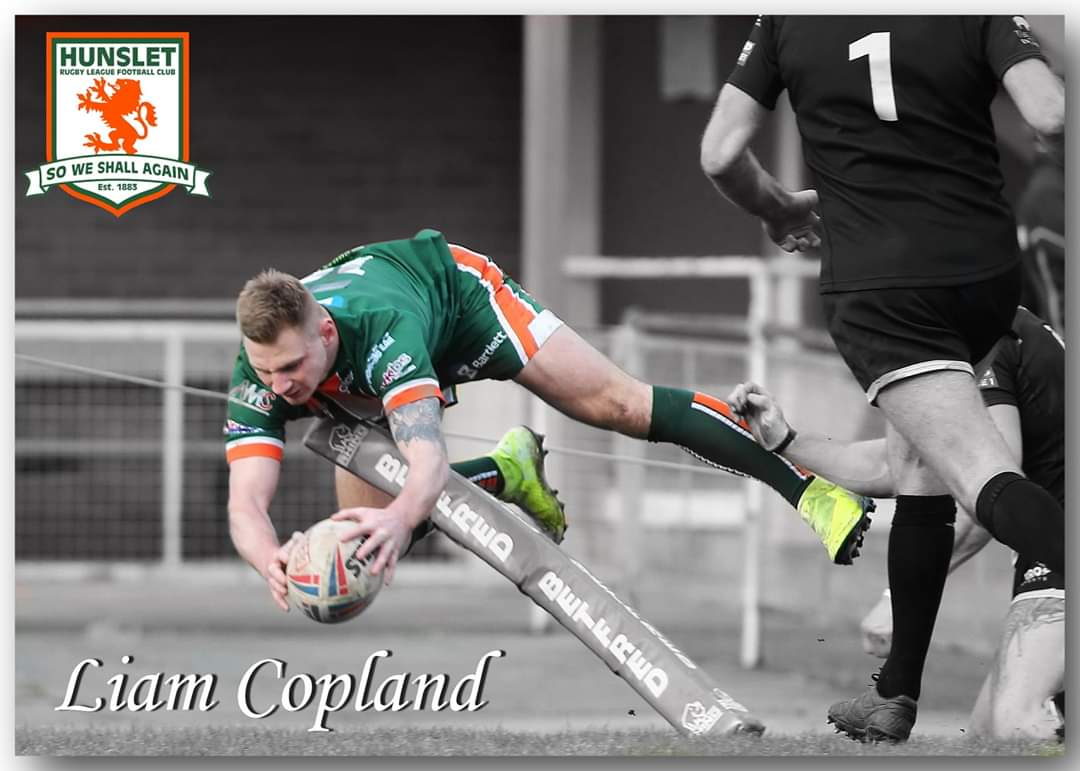 Liam began by speaking about his early days in Rugby League – very early in fact. His first taste of live action was at the age of six, when he was taken to watch his cousins playing for West Leeds minis.

Liam was obviously enjoying the action so one of the team’s coaches asked him if he wanted to join in and he replied yes, he would like to go training with them. “Training?” replied the coach, “I’ve got a spare kit, you can start now.” And so began the journey.

Liam spent many years at West Leeds, during which time he was invited to spend pre-season with Wakefield Trinity with a view to signing. Unfortunately this was not to be and so, at the age of 16, he took a sabbatical from Rugby League. He realised, however, that he still had a love of the game and returned to play at West Leeds before having a short spell at Wortley Dragons.

This was followed by the most successful period of his career – to date – after joining Stanningley. He signed mid-way through the 2017 season, when the team finished second in the National Conference League’s Division Three and were subsequently promoted.

Season 2019 was a bit tougher for Stanningley, but they still finished in the play-off places and battled to a place in the Final at the LD Nutrition Stadium, Featherstone, where they were pipped for a third consecutive promotion by Featherstone Lions, who won 23-10. Hunslet’s Assistant Coach, Gary Barnett, was at the match to cast an eye over Liam and he was invited to train at the South Leeds Stadium.

Head Coach Gary Thornton takes up the story. “Liam did really well in pre-season, trained hard and showed plenty of promise and strength in the warm-up games, which included scoring a spectacular try in the corner against Batley Bulldogs.”

So much so that he was offered, and signed, a contract before making his competitive debut in the Challenge Cup victory at North Wales – at the age of 26, just 20 years after his first game!

Despite the current lockdown due to Covid-19, Liam is keeping very busy. He has been doing two or three 5k runs each week and he is also still working in his `day job, for Jet 2. Indeed, he is busier than ever since his role is in customer relations, with a focus on helping customers who have to cancel a holiday to find a suitable alternative. Which, at the moment, is just about every customer!

It has been a long journey for Liam to reach the professional ranks and he says that he has been made very welcome by everyone at Hunslet. At the same time, he is keen to acknowledge the help he got during his time at Stanningley. “I had two and a half great years at Stanningley and learnt a lot. Tom Bell, Jordan Lilley and Ashton Golding have been really positive influences on my career.”

Thornton also has encouraging words. He said: “It’s still early days for Liam in the professional game, but he’s shown great promise in the short time he’s been with us, and has fitted into the group really well. He’s keen to learn and is hungry for success so hopefully he can have a big future at Hunslet, and fulfil his undoubted potential.”

Footnote: Liam is sponsored by Craig Irvine of The Office at Mirfield, who met each other through Wortley Dragons.

The picture shows Copland scoring a spectacular try in the pre-season victory over Batley Bulldogs.