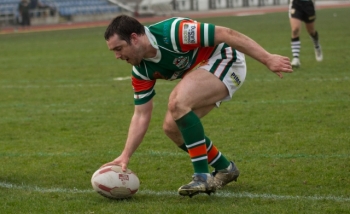 The club can today announce that long serving fullback Stuart Kain has left the club after 4 years.

Kainy as he was known, joined the Hawks in 2010 from Featherstone Rovers. He quickly made himself a fans favourite with some superb displays at fullback, no more so than in the clubs shock win away at Widnes in 2011, where he put in one of the best ever full back performances in a Hunslet shirt, making several try saving tackles as the Hawks won 18 points to 10.

Kainy’s last ever appearance for the Hawks was off the bench in the 2014 Grand Final at Headingley Carnegie, where he came on in the back row, a move that showed what he was all about, a player who was always willing to put the team first and give 110% for the club. Kainy leaves the club with two Championship One winners medal to his name.

Kainy will be missed by all at the club and we wish him well in the future.

Back to School on Monday