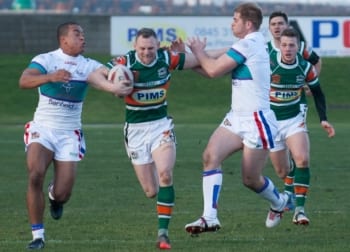 Hunslet Hawks RLFC can announce that Lee Mapals has re-joined the club until the end of the season following a trial period.

Mapals left the club in May 2014 and has since played for Newcastle Thunder & Gloucestershire All Golds.

Director of Rugby Darren Williams said “Lee was going to sign a contract for 2016 a couple of weeks ago but unfortunately he suffered a family bereavement which hit him hard so we gave him some compassionate leave. He returned to training and has suffered a slight ankle injury so won’t be available for selection for a couple of weeks but he will add completion to our outside backs.”

Lee will be sponsored for 2016 by Leeds Bacon Company Ltd