Marcus Elliott Joins From The Rams 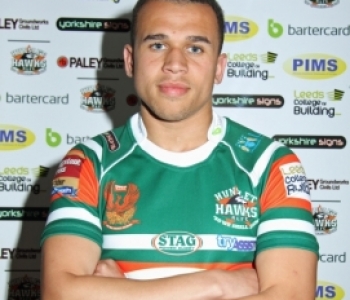 Hunslet Hawks RLFC are delighted to announce that utility back Marcus Elliott has joined the club from Dewsbury Rams. Elliott 20 is a full back/half back who can also cover the wing position.

Elliott joined Bradford Bulls on a 2 year deal from Leeds Rhinos in 2011 and Glenn Morrison subsequently took him with him to Dewsbury Rams where he has been unable to force his way into the Rams first team squad.

Director of Rugby Darren Williams said “I would like to thank Glenn Morrison and Dewsbury Rams for allowing Marcus the opportunity to join us for the rest of the season; he impressed us with his pace and illusiveness when he played against us on loan at Gloucester All Golds. We spoke to him about his plans for next year but when the opportunity arose to bring him in straight away we jumped at the chance.”

Williams added “He will train with us tonight & he’s another local kid too who lives in Belle Isle and fits the clubs community ethos that were trying to build here, we hope he can have the same impact as have other local players like Jimmy Watson & Brooke Broughton have made.”

Meanwhile Williams revealed that the club have terminated the contract of much travelled winger Lee Mapals who has been dismissed for gross misconduct following an initial suspension.