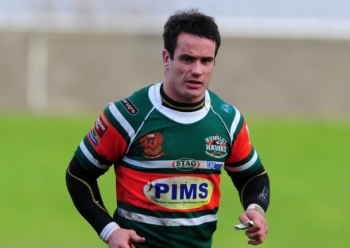 Hawks star Danny Maun caught up with YEP chief Rugby League writer Peter Smith this week to have a chat ahead of our trip to the DW Stadium to face Wigan Warriors in the Tetleys Challenge Cup.

More than a decade after learning his trade in Wigan Warriors’ lower grade sides, Danny Maun is finally set to achieve his ambition of playing a first team game at DW Stadium.

Maun is a key player for Hunslet Hawks, who are preparing to take on the holders – and reigning Super League champions – in the Tetley’s Challenge Cup fifth round on Sunday.

For Maun it will be a rare appearance in the spotlight after a career spent in the lower divisions – with Batley Bulldogs, Featherstone Rovers and Dewsbury Rams – and the 33-year-old centre is determined to enjoy every moment of it.

“I have never played against them and I have always wanted to,” said Maun, who joined Hawks in the off-season from Batley and has been a stand-out figure in a good start to the season which sees Hawks top of Kingstone Press Championship One after six rounds.

“It was brilliant to get that draw. When I was at Batley we always used to get Catalan Dragons or London Broncos – we played both of them twice – and we played St Helens once, when they were the top team.

“But going to Wigan will be a magic trip for us and it is going to be massive for the fans and the young kids in the team. I think they will benefit massively.

“It has been hard not to think about it since the draw was made. It is great for the club and hopefully they will make a bit of money out of it.”

The only down side is having to face an in-form Wigan outfit who scored 84 points against Bradford Bulls in a Super League game on Easter Monday.

“I was following that on Twitter,” Maun said. “When it was 46-0 I thought the game had finished – and it was only half-time.

“The lads will go there full of enthusiasm and that plays a big part. Our young kids will have a dig, but we are under no illusions, we know there’s a load of class players in their team.

“Sean O’Loughlin is one of the best in the world in his position and to play against players like that can only be good for us.

“We will always be able to say we played against Wigan and we are going there looking forward to it, rather than in fear.”

For Maun, it was almost a case of being able to say he played for Wigan.

“A lot of people think I am from Wigan, but I am actually from Dewsbury,” he said.

“I learned a lot of things when I was at Wigan that have been invaluable.

“I just wish I was in the scholarship now, because it has moved on a lot since I was there.

“Maybe it was not as good in my day, but I still learned a lot and I was grateful for the opportunity.”

Maun admitted he was “massively disappointed” never to make a first team appearance for Wigan.

“When I went to Batley I felt I would learn a lot more playing first team at the weekend,” he recalled.

“I think at Wigan I was getting a bit stale in the under-21s and Alliance team.

“I remember Tony Mestrov dropping down and playing in the Alliance and I wasn’t really getting a fair chance I thought a young kid should have been getting – but still it was a great experience and I’ve got no regrets,” he said.

Meanwhile, an acclaimed play based around the late BBC TV commentator Eddie Waring’s attempts to give rugby league a national profile is to be staged in the Phoenix Suite at South Leeds Stadium on Thursday, May 22.

Playing The Joker, written by Anthony Clavane and performed by the Red Letter Theatre Company, was first staged at West Yorkshire Playhouse, in Leeds, last autumn and is now touring rugby league venues across the north of England. Tickets for the Hunslet show, which lasts 45 minutes, are priced at £3 and available from reception at the John Charles Centre for Sport or by calling 0113 271 2730.