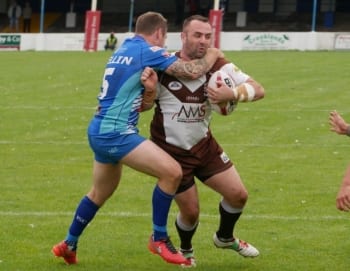 Hunslet Hawks can today announce that experienced prop forward Michael Haley has signed a 12-month contract extension keeping him at the South Leeds Stadium for the 2017 season.

Michael who is 28 and Middleton born, is a former Leeds Rhino junior who signed for Doncaster in 2006 before moving onto Sheffield Eagles in 2008, he then joined Featherstone Rovers in 2010 before arriving at the Hawks in 2013.

Haley who is sponsored by Barry & Norma Harding was part of our 2014 Grand Final winning team. He has made 75 appearances for the club scoring 5 tries.

Director of Rugby Darren Williams said “Mickey is now one of our most experienced and respected players amongst the group and our younger props like Lewis Reed certainly look up to him.

“He is a leader on the field by his actions, he puts 100% into every game when he’s out on the field in the heat of battle.

“He’s had a good season and avoided the serious injuries that have hampered him in the past. It’s quality to have him on board for 2017.”

Michael commented “I didn’t hesitate to sign for a further year, i love playing at Hunslet, the fans are loud & proud, the club is a well run family club, plus all the lads are a great bunch to play with.

“I’m looking forward to next season, and trying to get the club back where it belongs.”