Morley and Wellens to conduct fourth round draw 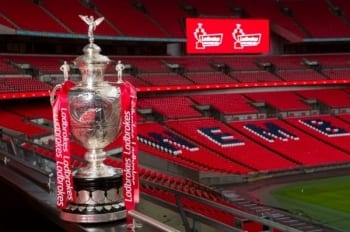 Challenge Cup winners Adrian Morley and Paul Wellens will be the guests conducting the draw for the fourth round of the 2016 Ladbrokes Challenge Cup on Tuesday March 1.

Joining the successful teams from this weekend’s third round fixtures will be all 12 Kingstone Press Championship clubs, including newly promoted Swinton Lions. This year marks 150 years since the club’s formation, and to celebrate, the fourth round draw will take place at the White Lion in Swinton, a place where the team moved their headquarters to in the 1870s and took on the Lions nickname, which is one of the oldest in British sport.

Morley, who retired at the end of the 2015 season, is one of the most respected figures in the game, winning the Challenge Cup four times – once with Leeds Rhinos (1999) and three times with Warrington Wolves (2009, 2010, 2012). With over 500 appearances for club and country, Morley was also part of the Bradford Bulls team that were crowned Super League champions in 2005 and won the NRL Premiership with Sydney Roosters in 2002.

Wellens, a one club man, made his debut for St Helens in 1998 and went on to lift the Challenge Cup an impressive five times and Lance Todd Trophy twice. In 2006 he was part of the side that won all three major domestic honours available – Challenge Cup, Super League and World Club Challenge. During that year Wellens was also named Man of Steel.

The draw will be streamed exclusively live on the Ladbrokes Challenge Cup website from 7.00pm – Rugby League fans can watch by visiting www.rugby-league.com/challengecup.

Fourth round ties will be played over the weekend of March 19-20.

Tickets for the 2016 Ladbrokes Challenge Cup final at Wembley Stadium on Saturday August 27 cost from as little as £20 and can be purchased by calling the RFL Ticket Office on 0844 856 1113 or by visiting www.rugby-league.com/tickets

The full schedule of Ladbrokes Challenge Cup third round ties is as follows: