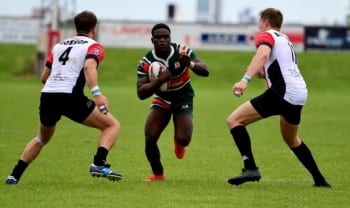 Hunslet RLFC are delighted to announce that strong running centre Mufaro Mvududu has signed a 12-month contract extension keeping him at the club for the 2018 season.

Mvududu 26 joined the club in September 2014 following an impressive season for London Skolars. He has gone on to score 25 tries in 45 appearances for the club.

Muffa as he is known at the club has been in fine form during the 2017 Kingstone Press League 1 campaign, making 21 appearances for the club scoring 14 tries and is continuously improving year on year.

Head Coach Gary Thornton said “Muffa has been one of our stand out players since I arrived, and I felt it was important to get him tied up for next season.

“He is a consistent performer week in week out, and is improving with every year’s experience he gets under his belt.

“He has some great qualities as an individual and as a player, which we need to build on for next year.

“With interest from other clubs, it was important we got the deal sorted quickly and I’m delighted he has decided to stay.

“He’s been loyal to Hunslet for a number of seasons now, and it’s nice to repay that loyalty and keep good people and good players at the club.”

Mvududu was delighted to be extending his stay at the South Leeds Stadium “’I am thrilled to have signed a contract extension for 2018.

“Having spoken to Gary over the past few weeks, it made sense for me to stay at a club where I’m enjoying my rugby. Not only that, the ideas and ambitions he has for club excite me.

“Im looking forward to hopefully having a big season next year and keep improving myself as a player.”