Naylor looking to down Hawks 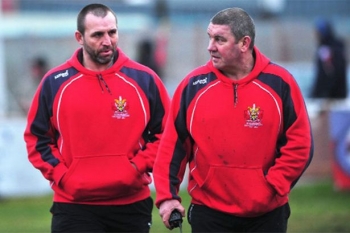 Oldham coach Scott Naylor believes all the pressure is on Hunslet Hawks in their Kingstone Press Championship One Qualifying Play-off match at South Leeds Stadium on Friday (8.00pm).

The winner of tomrorow’s game will take on league leaders York City Knights – who have a Week One bye in the five-club play-off series – but, given the experience of Hunslet’s squad, Naylor feels that it is Oldham’s opponents who are favourites to progress.

“Hunslet have a lot of experience and quality in their side in players like Dave March and Richard Moore,” said Naylor. “I can’t see the play-offs worrying their side and they’ll definitely take all this in their stride.

“They have real quality in the backs and people across the field who can finish tries so we’ve all got turn up on Friday and have a dig.

“We’re going to forget what’s happened in the past in terms of results and focus on what is required now. We don’t expect anything less from Hunslet other than a tough game. All the pressure is on them as they are expected to win and potentially go up.”

Naylor has been impressed with the quality on show during this year’s Championship One season, and wants to see Hunslet’s fans – who have also impressed this campaign – turn up in their numbers to see Oldham into a second play-off final in two years.

“The quality of the teams and players on display in the league this year has been superb and it’s great to see,” said Naylor. “There isn’t anyone we haven’t beaten this year which shows how competitive it’s been.

“We want to go up and targeted promotion at the beginning of the year. Everyone expects Hunslet or York to gain promotion but we believe we can be in the mix too. We’re good enough and committed.”

“Our fans have been unbelievable all season and numbers going through the gate have been growing. The travelling support has also been amazing with many fans making the trip down to London and creating a great atmosphere.

“They have never judged us on one game and keep on cheering even through the tough times which is really positive for the lads to hear. It’ll be great to see them all on Friday.”

Tickets for the Kingstone Press Championship One play-off, Hunslet Hawks v Oldham at South Leeds Stadium on Friday September 12 (8.00pm) can be purchased from as little as £12 for adults, £8 for concessions and £2 for under-16s.

Tickets for the 2014 Kingstone Press Championships Finals Day are on sale now and are priced from £17 for adults and £10 for concessions. Book your tickets by visiting www.rugbyleaguetickets.co.uk or call 0844 856 1113.