Parksiders looking for Moore success in 2019 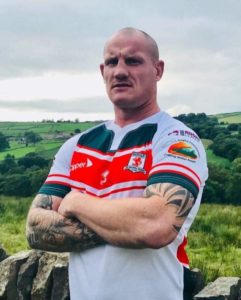 Hunslet RLFC are delighted to announce the signing of experienced front-row forward Richard Moore on a two-year contract from Featherstone Rovers.

Moore 37, will join the Parksiders for a third time following a spell on dual registration in 2013 and a successful spell in 2014.

Parksiders fans will remember well the impact Richard had during the 2014 playoffs, helping the club to win the Championship 1 Grand Final at Headingley and gain promotion to the Championship. Who can ever forget that drop goal attempt in the final?

In a career spanning 18 seasons Richard has played for number of clubs making over 250 first grade appearance’s. He burst onto the Super League scene in 2001, debuting for Bradford Bulls as a rising front-row star, before joining London Broncos, for 2004, and Leigh Centurions prior to the start of the 2005 campaign.

Richard made over 100 appearances for Wakefield Trinity and went on to sign for newly-promoted Super League side Crusaders in 2011, being fielded 22 times across the season.

He began life in the Championship with Halifax, in 2015, and signed for Featherstone prior to the start of 2017. He went on to make 45 appearances for Rovers becoming a fans favourite over his two year spell at the LD Nutrition Stadium.

Gary Thornton was delighted with the capture of the veteran forward “This is a major signing for us, and shows our intentions to develop and build this team, and fulfill our ambitions to become a future top Championship club.

“Richie has vast experience at Super League and Championship level, and will have a huge impact on our group next season.

“Well respected and well admired by many, he will be a major force on the field, and his professionalism, attitude and commitment to the cause, will rub off on others around him.

“We’ve lacked a player of Richie’s stature and experience, and I’m absolutely delighted he has joined us.

“Darren Williams has continued communications with Richie since his days at the club back in 2014, and that played a significant contribution in getting his signature.

“I’m really looking forward to working with Richie – a quality player, and a quality person, who will add to our already impressive forward pack.

Richard was equally happy to be returning to the South Leeds Stadium “I’m very happy about returning to Hunslet.

“I have some very good memories from my short time at the club culminating in the Grand Final win at Headingley.

“It’s a club I always kept an eye out for and I have kept in contact with club officials after I left.

“The fans made me feel very welcome and I can’t wait to get started in November.”

To sponsor Richard in 2019 email darren.williams@hunsletrlfc.com