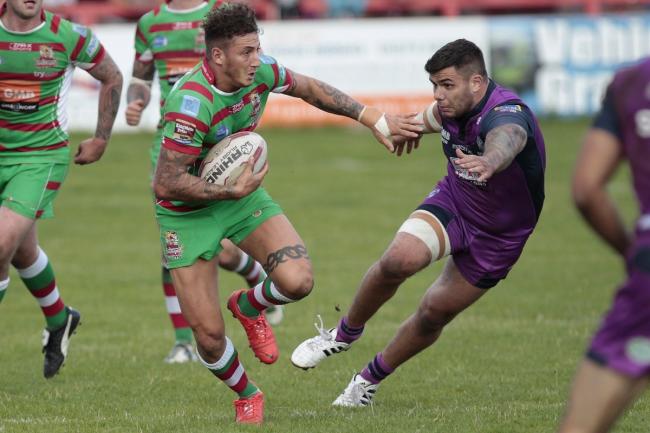 Hunslet RLFC can today announce that Daley Williams has signed for the club until the end of the current season.

Williams had previous spells at Salford, Batley Bulldogs & Keighley Cougars until he was suspended for a doping violation in 2015.

Williams 32 can train with the club immediately but is not eligible for selection until 08th July 2018.

Football manager Darren Williams said “Daley admits he made a huge error of judgement and is keen to return to the game he loves knowing it’s his last opportunity but still potentially has 3-4 years left in his career.

“He was a prolific centre/wing who was much sought after having options to sign for two Championship Clubs.

“He’s been made fully aware of the clubs professional requirements; having 3 years out of the professional game is a long time but he’s been hitting the gym hard and has certainly put some size on.

“He will now be in our systems for 8 weeks to enable Head Coach Gary Thornton to assess his fitness levels and he increases our options as we head towards to middle part of the season.”

Head Coach Gary Thornton said “Daley Williams is a proven, quality rugby league player, who made a mistake in his life. He has served his time, and is full of regret and remorse for his actions, and he is ready to move on and get back onto a rugby field to show people how good he can be.

“Everyone deserves a second chance in life, and having spoken to Daley at regular intervals we are confident he is coming back for the right reasons.

“Darren and I have been in regular contact with Daley since he expressed a wish to get back into the game, and I am more than happy to give him a second chance to resume his rugby league career with us.

“He has had plenty of offers from other clubs, but he has stayed loyal in his decision to join us.

“He has a real determination to put things right, and has kept himself in great shape physically.

“He will need to get his match fitness up to speed obviously, but we will welcome him into our group, and our culture, and I’m confident he will be ready to play in a few weeks’ time, and prove to be a valuable addition to our squad for the important run in to the season end.”

Daley added “It’s been a long three years, so I’ve had time to reflect on my poor decisions.

“I can 100% state I have definitely learnt from my mistakes and I just cannot wait to get back in the game and put the past behind me and move on.

“I’m very grateful for the opportunity Hunslet have given me, it’s now time to repay that faith and look ahead to the future and make my family proud of me.”