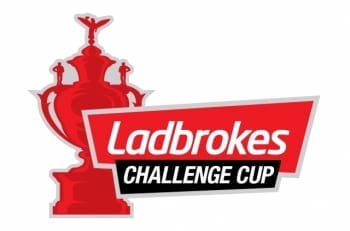 Former England internationals Jamie Peacock MBE and Leon Pryce will conduct the draw for the fourth round of Rugby League’s oldest and most prestigious competition, the Ladbrokes Challenge Cup at Provident Stadium, Bradford tonight between 6.30pm and 6.45pm.

Peacock, a member of the victorious Leeds Rhinos team that lifted the famous old trophy at Wembley Stadium last August, and Hull FC half-back Pryce both have strong links with Odsal having spent their formative years with Bradford Bulls.

The draw sees the entry into the Ladbrokes Challenge Cup of Bradford and the 11 other Kingstone Press Championship clubs, who will join the 12 winners of this weekend’s third round ties.

The draw will be streamed live on the official Ladbrokes Challenge Cup website, www.challengecup.com, selected BBC local radio stations and will form part of a public event celebrating the competition and the entry of the Championship clubs.