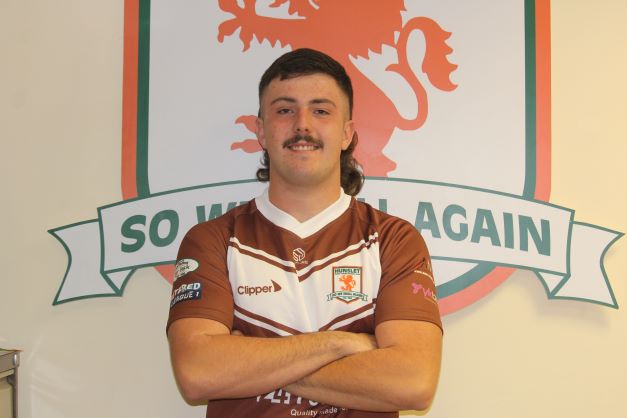 Charley Bodman feels that in many ways he has come full circle in signing for Hunslet.

The 19-year-old second row or loose forward has joined the Parksiders from West Wales Raiders and reveals: “It was against Hunslet that I made my debut, last year. And it was also against my new club that I scored my first try, so there’s a nice piece of symmetry there.

“Perhaps more seriously, there’s no question that Hunslet are building a good young squad under head coach Alan Kilshaw and I’m sure that I’ll not have long to wait for my first win, which never happened with the Raiders.”

West Wales may have tasted defeat after defeat last season – other than the notable draw against Doncaster – but many members of the side (including Bodman) made big impressions, despite being on the losing side. That was certainly the case when the Raiders, despite being barely able to muster a starting 13, lost 82-6 at the South Leeds Stadium in early September.

Bodman showed terrific heart that day – a fact not lost on Kilshaw – and he has already taken Hunslet’s proud history to that self-same heart.

He said: “I know that this is historically a great club, the first to win All Four Cups for instance, and I’m also aware that many fine Welsh players have preceded me here. I’m determined to carry on that proud tradition in front of a set of fans who have always impressed me with their vocal and passionate support.”

Head coach Alan Kilshaw added: “Charley, like his former West Wales teammate Rowland Kaye, who has also joined us, has shown huge commitment to the club by relocating and changing employment.

“He is another player who is prepared to come out of his comfort zone and come into a new environment.

“I’m looking forward to helping him progress. I’m sure he will develop physically as well, as he’s still at a young age.”

He concluded: “He can play in the middle or on an edge, and his versatility will be a good asset for us next season. I’m sure everyone will welcome him to Hunslet!”