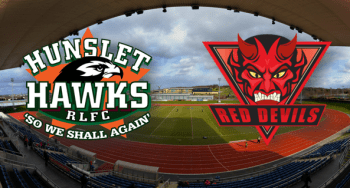 The Hawks will entertain Salford Red Devils at South Leeds Stadium on Saturday 24th January 2pm kick off. The Devils and the Hawks were due to play Featherstone in pre season games but both have been postponed due to problems with the pitch at Featherstone.

The additional game with Salford will see the Hawks take on a huge challenge as the Red Devils are now one of the most glamorous clubs in the country and will bring with them a host of big name recruits in what is their final pre season game before Super League commences.

Director of Rugby Darren Williams said “Its an honour and also a huge challenge for the club to entertain the newly born Red Devils to South Leeds who will bring with them some of the biggest names in Rugby League.”

“After speaking with Salford CEO Martin Vickers he advises me that Iestyn Harris will be naming what he sees as his strongest 17 in readiness for the big Super League kick off and including all their big guns.”

“Salford under the ownership of Dr Marwan Koukash are probably the most ambitious club in Super League right now and are one of the most exciting free flowing teams to watch, you only have to look at their playing roster to see what a fantastic array of talent they have at their disposal.”

“We also play Doncaster the following day at the Keepmoat Stadium in the “John Sheridan” Shield and were taking both games very seriously indeed, we have 31 players signed on and we also want to look at a couple of trialists in action so we have the strength to put out 2 competitive teams.”

“It was vital we replaced the postponed Featherstone game in order to give all the squad an opportunity with decent game time to push for a starting spot come the big Championship kick off in February and this additional fixture will facilitate that.”

Admission for the game will be priced:

Supporters are advised that only the lower tier of the main stand at the South Leeds Stadium will be open for the game due to the matchday cost.