Resilience the key to Hunslet’s victory over the Skolars, hails Kilshaw 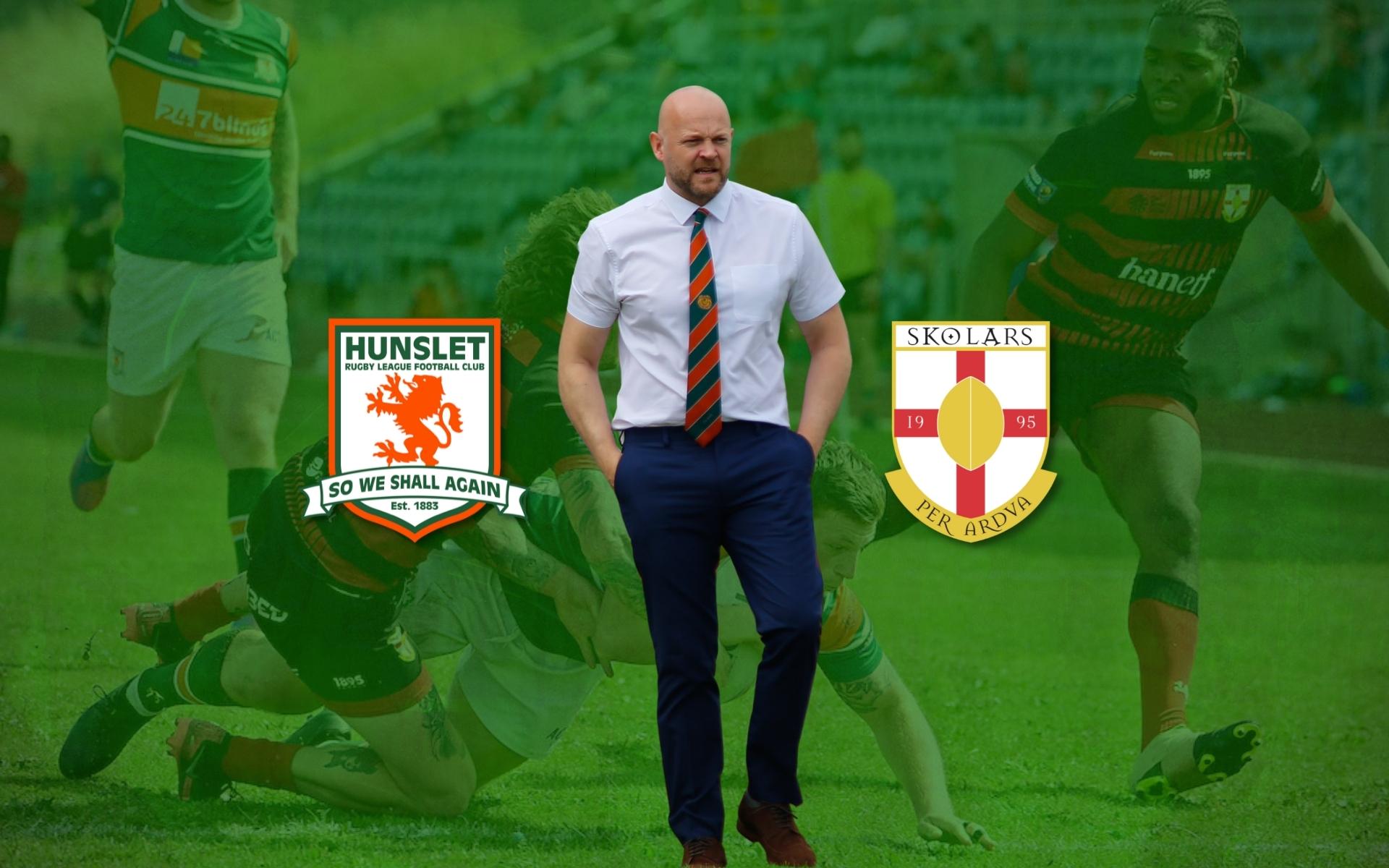 Hunslet continued their fine recent form on Sunday with an impressive 43-16 win over a gritty London Skolars side that, in different circumstances, could perhaps have ended in defeat.

The Parksiders went into the closing quarter of the Betfred League One clash with only 15 men left, having lost captain Duane Straugheir, who was in his first game back after several weeks,  with a recurrence of his arm injury, while fullback Jimmy Watson, limped off on the hour with a leg injury.

Debut prop Ross Peltier therefore had to put in a big stint in his first competitive match for some time and made a big impression, while the likes of halfback Matty Beharrell, prop Harvey Hallas and three quarter Jacob Doyle were also outstanding.

Head coach Alan Kilshaw said: “At only 18-10 in front at that stage, we could have wilted, but not this group. Far from buckling, we finished very strongly with four tries, conceding only one to a team inspired by fullback Jarred Bassett. That says a great deal about the resilience in this side.”

That resilience was evident despite the absence of suspended second row Josh Jordan-Roberts, a `cement-like’ player who gets through a great deal of unheralded defensive work. Hunslet’s match-clinching tries went to Joe Summers, Doyle, Jordan Syme and Beharrell, while the latter closed with seven goals from seven shots and a field goal. He was also involved in several of the Parksiders’ touchdowns, and kicked a 40-20 for good measure.

The Parksiders had recovered from an early try to forge their lead with touchdowns by Watson, Hallas and Syme; Kilshaw, who celebrated the first anniversary of his being appointed today (Tuesday 19 July) can reflect on a very satisfactory return since then of 15 victories and three draws from 26 competitive games. It’s a record that would be even more impressive but for one or two highly controversial defeats, and he plans to further build on that form, although Watson is having his leg checked by medics tonight and Straugheir’s injury could be the same as the one that left him kicking his heels for several weeks.

`Killer’ said: “We’ll know more later in the week but a saving grace is that we have players due to return. We rested Wayne Reittie and Pat Walker, who suffered hamstring and back injuries respectively recently at Cornwall, as we didn’t want to risk them on a bone-hard pitch. Ethan O’Hanlon isn’t far off returning from his ankle injury and Peltier will be better with a long game behind him – he made a big impression, as did fellow prop Harvey Hallas.”

Both hookers – Oli Burton and Harvey Whiteley – also shone, as did winger Jack Render and increasingly impressive halfback Jordan Paga, who pulled off one his trademark try-saving tackles after having chased back in the early stages.

`Killer’ reflected of his year in post: “I effectively started from scratch, with many new faces drafted in. But the side is gelling, and we’ve been smart with our loan signings, including the likes of Beharrell and Peltier. The nature of the victory over the Skolars shouldn’t be minimised, they’re a good side and if the season was starting right now they’d certainly be pushing for promotion. But we’re in good heart, ourselves, now that we’re at the business end of the campaign and pushing for advantageous league placings ahead of the promotion play-offs.”