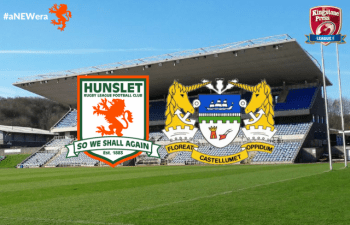 Hunslet RLFC have today announced that Assistant Coach Rob Roberts will take temporary charge of team affairs, starting this Sunday as we take on Workington Town at the South Leeds Stadium in round 9 of Kingstone Press League 1.

In his first game in temporary charge, ‘Two Bobs’ has recalled Jack Lee, Jake Normington, Sean Hesketh & Marcus Webb to the 19 man squad. Niall Walker who scored on his debut in last week’s defeat to Oxford misses out with bursitis.

Fans of Hunslet RLFC can buy their merchandise from the impressive Errea Truck this Sunday. Pop along and say hello and provide buysportskitPRO with feedback on what other products you would like to see in the clubs merchandise range.