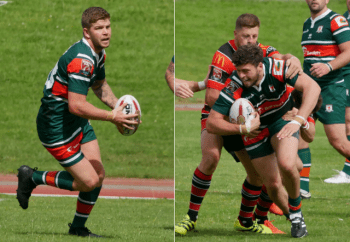 Hunslet RLFC can today announce the re-signing of brothers Shaun and Dean Roberts on 12-month contracts.

Shaun, 24, is a half back who signed for the club half way through last season, making his debut for the club in Toronto against the Wolfpack. He made 4 appearances for the club in 2017 and will be looking to push for a regular place in the starting 17 next season.

Dean, 21, is a centre/back row forward who also joined us half way through 2017 having been on trial at York City Knights. Dean went on to make 7 appearances for the club, scoring one try and helping the club to go on and win the League 1 Shield.

Gary Thornton was pleased to see both brothers commit to the club for 2018; “Shaun and Dean came late in the season last year, and showed some real potential during their short time here. I’m really pleased to have them on board for next season, and I’m sure they will benefit enormously from a full preseason with the squad.

“Shaun made his debut at Toronto, which was a real baptism of fire for him coming from the amateur game. But he conducted himself and adapted to the situation really well, and showed some real promise.

“He is developing his game all the time, and playing and training with better players will help him improve his decision making skills, and develop into a better half back. Because he came into the squad late last year, I thought it was important we gave him the opportunity to come in and do a full pre-season with us.

“He has a fantastic attitude and is a very likeable person to have around the place, and I hope he takes the challenge with both hands.

“He will create some real competition for places in the halves, and is a confident young man and is backing himself to push on next season.

GT added “Dean got his opportunity in the playoff games and really impressed the coaching staff. He is a big, strong lad who has the potential to develop into a top class forward at this level.

“He’s still very young, and like Shaun, has a great attitude and approach to training and the playing. We will be working really hard with him in pre-season, to get him bigger and stronger, and develop his skillset.

“He showed he can be a real handful in the few games he played, and has the potential to really flourish in our environment. Although he came to us as a back rower, we see potential for him to push up to the front row eventually, but we will assess the situation over pre-season and see where we think he will be best utilised. Again, training and playing with better players will benefit him no end.

“They are both very popular members of the squad and hopefully they can kick on in 2018 and prove their value to the group.”

Shaun was delighted to be given the opportunity to push for regular first team spot in 2018; “Firstly I’d just like to thank Gary and the people at the club as well as the fans for giving me another opportunity to play at this level.

“I feel I owe Hunslet a lot as they gave me a shot last year and the fans showed faith in Gary’s decision to bring me in to the club. The only way to repay them is to go out there next year and give 100%.

“After Tuesday’s initial meeting with the squad and staff, it shows that the club are heading in the right direction, and with the quality of players we’ve brought in there’s no reason why we can’t be fighting for that top spot. Roll on 2018.”

Dean was equally excited to be staying on for another 12 months; “After the success of winning the Shield and having a good run of game time to the back end of the season it excites me to see what this year is going to bring.

“The feeling around the club after our initial meeting seems to be very positive and everyone is singing from the same hymn sheet, so that can only help towards our aim of gaining promotion.

“I’d just like to say thanks to Gary and the people behind the scenes at Hunslet for the opportunity and also thanks the fans for their support throughout last season.”