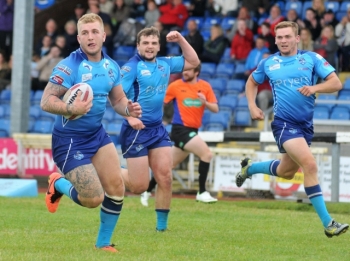 Hunslet Hawks RLFC can today reveal that they have signed back row forward Ryan Backhouse from York City Knights on a 1 year contract.

Backhouse joined the Knights from Castleford Tigers in 2013 as then head coach Gary Thornton who also worked with him at the Tigers moved instantly to secure his services when he was released by the Super League club.

Director of Rugby Darren Williams said “Ryan is a tremendous addition to our squad for 2015, at 21 his best years are in front of him and he comes with some glowing endorsements from people I respect in the game. He is a very powerful runner and impressed when he played against us this season for the Knights. This is a great opportunity for Ryan like alot of our new recruits for 2015 in their early twenties to really kick on next year.”

Backhouse added “I’m very grateful to Hunslet for giving me this opportunity to play in the Championship next year and I hope to put in some big performances and continue my development and kick on and do well with the Hawks.”