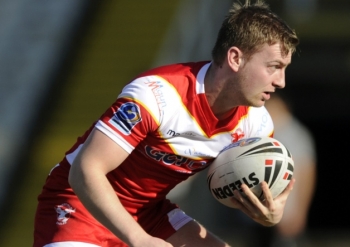 Hunslet Hawks RLFC are delighted to announce the signing of 25 year old goal kicking half back Simon Brown from Halifax on a 1 year contract.

Leeds born Brown graduated through the Leeds Rhinos junior systems after signing from Hunslet Parkside. He was released by the Rhinos and had 3 terrific years at Sheffield Eagles before joining York City Knights. He was then snapped up by Halifax coach Karl Harrison and spent 2014 at the Shay.

Director of Rugby Darren Williams said “We were looking to recruit some real quality in the half’s once we decided to release both the Coyle brothers from their 2015 contracts with the club and moved instantly once we were made aware of Simon’s availability. He is an organising half renowned for a terrific kicking game and is exactly what we were looking for. He’s not had the best couple of years since he moved from Sheffield by his own admission and were confident that under head coach Barry Eaton he can develop his game even further. Simon works and lives in the city and like most of our 2015 squad will be a local lad returning to play for his community club.”

On his signing Brown added “Im really excited about this new challenge and looking forward to working with Barry and joining Hunslet who have progressed massively as a club over the last few years.”

Meanwhile Williams revealed that the club have signed Brandon Conway from Wakefield Trinity Wildcats also on a 1 year contract. Conway 19 is a utility back who can play wing, centre and full back with confidence. Williams added “From the footage we have seen Brandon is a big strong ball carrier and a good finisher; he’s got some decent size about him as well and he’s coming here for an opportunity to play at a good standard against some seasoned professionals and were quite excited about how he may progress.”