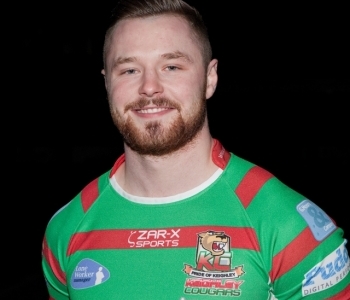 Hunslet Hawks can today announce the signing of 23 year old centre Elliott Cosgrove from Keighley Cougars on a 1 year contract.

Cosgrove joined the Cougars from Dewsbury Rams in 2013 following a loan spell. He is an Irish International and a former Huddersfield Giants Academy player. He also enjoyed a period playing in Australia with New South Wales cup side North Sydney Bears.

Director of Rugby Darren Williams said “Were delighted to add Elliott to our Championship squad for 2015, he’s a very aggressive defender who still has plenty of improvement in him, he has recently been playing for Huddersfield Rugby Union before his call up to the Ireland squad for the European Championship. He is a centre who can also play in the back row.”

Williams added “Were getting there now with our squad make up, it’s been a hectic few weeks following the Grand Final success and we were aware that we would need an influx of new blood as the 2014 squad broke up for differing reasons, we’ve another 2 signings to complete later on this week before we start back for pre season on 18th November.”