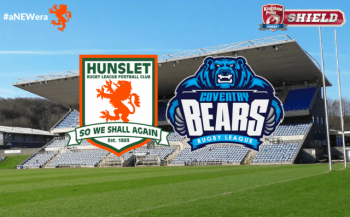 Marcus Webb returns to the squad after representing Wales at the recent Student World Cup. Dean Roberts, Luke Teasdale and James Duckworth look set to make their Hunslet debuts and there is a welcome return for Sean Hesketh.

Jack Lee is ruled out after an operation this week on his torn bicep as is Tommy Brierley with his knee, both players look set to miss the rest of the season.