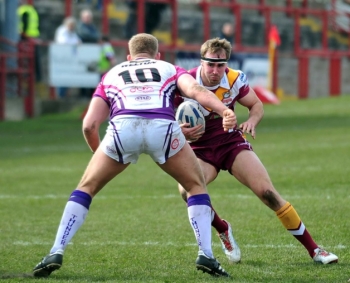 Walmsley was a pre season signing for Featherstone Rovers from Batley Bulldogs but suffered an arm injury in pre season, now fully fit he trained with his new team mates last night and will come into contention for Sunday’s home game with Gloucester All Golds.

Lewis Price is the son of former Rovers player Gary S Price who signed for Featherstone in 2012 and is a former Castleford Tiger scholarship player and Castleford Lock Lane junior.

He has been playing regularly in Rovers under 20’s side and has a good frame who has the potential to be a high quality player.

Director of Rugby Darren Williams said “The addition of Liam comes as a timely boost as we have several players unavailable for this Sundays game against Gloucester All Golds, Liam had a very good year last year at Batley when he came to prominence and is now fully fit and eager to return to action. He is a workaholic on the field with a good attitude and i would like to thank Craig Poskitt from Featherstone Rovers for facilitating this loan move which has the option to be extended until the end of the season. Price comes with good reports and was highly thought of by Darryl Powell and we will have a look at him in training this week.