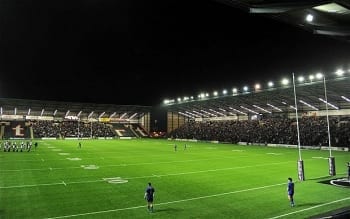 The Select Security Stadium will host the season-ending Kingstone Press Finals Day when glory will be up for grabs by clubs from the sport’s second, third and fourth tiers.

The action kicks off at 11.30am with the Conference Challenge Trophy final and continues with the Kingstone Press League 1 play-off final at 2.00pm.

What is sure to be a memorable day will end with the final of the Kingstone Press Championship Shield at 4.30pm.

RFL Chief Executive Nigel Wood said: “The new league structure has gripped the imagination across all competitions with more unpredictability of outcome than ever before and the Kingstone Press Finals Day will make for a fitting finale to a season where every minute really does matter.

“Following on from the success of the Summer Bash and Magic Weekend, the Kingstone Press Finals Day has all the makings of another terrific festival of Rugby League.

“I am sure fans will not want to miss out on what will be a day to remember where the professional and community games come together.”

The League 1 play-offs involve five clubs and will determine the second promotion place to the Championship for 2016. At the end of the regular season, first will play second for automatic promotion as champions: the loser of that match then join the clubs that finished third, fourth and fifth in the play-offs.

First or second will be at home to fifth and third at home to fourth: the winners will then contest the League 1 play-off final at Widnes.

First will play fourth and second will host third with the winners going through to the Championship Shield final for the chance to end the year with a trophy lift.

Details of ticket prices and availability will be announced shortly.