Williams and Walton next to commit to the club for 2018 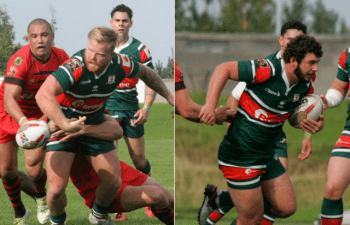 Jack, 22, is a back row-forward who previously played for Wakefield Trinity & Castleford Tigers. He joined us from Doncaster RLFC at the start of the 2017 season and went on to make 15 appearances scoring two ties.

Danny, 28, is a hard hitting back-row forward who first joined the club in 2016 following a successful trial spell. He went on to make 23 appearances scoring 2 tries before returning to the amateur game. He returned to the club in 2017 and went on to play a key role in the club lifting the League 1 Shield.

Gary Thornton was delighted to keep hold of two important players; “I’m really pleased to have retained both Danny and Jack for next season. Both contributed really well towards the back end of the season and were both instrumental in our successful run up to wining the League 1 Shield.

“Jack showed a really good attitude towards the League 1 Shield 8’s competition, and he got better week by week. He is developing further with each season he plays at this level, and has good utility value as he performs equally well in the front or back row.

“Jack’s a good character to have around the place and applies a professional attitude to training and playing and I’m hoping he has a big season for us next year.

“I brought Danny back to the club after he was released by the previous coach, as I recognised his value to the group.

“When I coached against Danny I always highlighted him as a strong defender and carrier of the ball, so I was keen to get him back into the squad.

“It took him a while to get his fitness up to sped as I expected, but once he did, he demonstrated how good he can be. He’s a tough, uncompromising type of forward, and another who works hard on the training field. With a big preseason behind him I’m sure he will be a great asset for us next year.”

Jack Walton was delighted to have re-signed for another 12–months; “I’m really happy to be signed up for another year down at Hunslet, I had a really enjoyable first year at the club and made some great mates within the place.

“We didn’t have the best year ending up in the League 1 shield when we wanted to be challenging for the top 4/5 but I think we turned it around by securing that shield final win.

“It’s a historic club with a fantastic fan base which was shown by the numbers we took to Toronto last year.

“I’m looking forward to a tough pre-season and helping the team push for promotion back in to Championship where we belong.”

Danny was equally pleased to be staying on at the South Leeds Stadium; “I am pleased to of signed another year with Hunslet.

“Hopefully we can give something back to the loyal set of fans we have at Hunslet.”