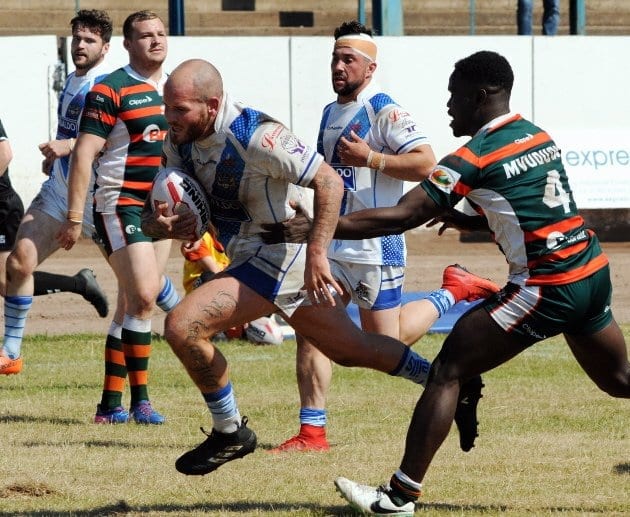 Hunslet RLFC suffered their first defeat in eight matches this afternoon (8 July 2018) as they were beaten 28-18 by Workington Town in the Cumbrian sunshine.

This was an important match for both clubs as they push for promotion at the top of League 1. The Parksiders fielded this week’s four new signings: Gavin Duffy, Ryan Wright, Josh Tonks and Daley Williams, coming for a number injured regulars; and this may have upset their winning rhythm. Three tries in eleven minutes early in the second half for Town turned the game round and laid the foundation for their victory.

Hunslet started well and were 12 points up inside 20 minutes as first Duane Staugheir and then Mufaro Mvududu crossed the whitewash. Joe Sanderson converted both tries.

Workington hit back through Kurt Maudling, but Carl Forber was unable to convert from the sideline. In the 26th minute Sanderson kicked a penalty for Hunslet to extend their lead to 4-14, which was still the score when the teams went in at the break.

The second half started with a sin binning which took Hunslet down to 12 men. Workington made their extra man count as Steve Scholey scored. Five minutes later Tom Curwen broke through and passed to Oliver Wilkes who scored.

On 56 minutes Jamie Doran scored Workington’s third try of the half. Carl Forber kicked all three conversions and suddenly Town were in the lead 22-14.

Seven minutes later Hunslet pulled it back to 22-18, but Sanderson missed his conversion attempt.

Town sealed their win five minutes from time when Scott Rooke took a pass from Sean Penkywicz to score in the corner, Forber kicked the extras.

Workington climbed above Hunslet in the table, although only on points difference, the two clubs are tied with Oldham on 22 points.

Next Sunday (15 July 2018) Hunslet entertain Bradford Bulls at the South Leeds stadium. Kick off is at 1pm, so there’s no danger of missing the World Cup Final, and under 16s are free.