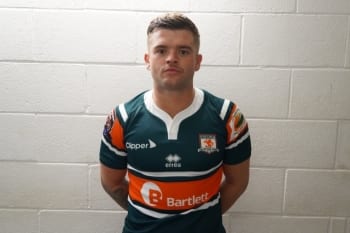 Hunslet RLFC can today announce the signing of young Australian half back Jake Barnett.

Jake, 22 is the son of former Bradford Northern, Batley and Bramley player Steve Barnett and the nephew of our current assistant coach Gary.

Jake who can play half back, hooker or full back is a product of the Eastern Suburbs Tigers club in Brisbane, who are affiliated to the Melbourne Storm.

Jake, who has dual nationality then joined the navy and represented Australia playing for the Navy Tridents team at Rugby League and Rugby Union in both inter-service and international competitions.

Gary Thornton was pleased to give Jake his opportunity; “Jake has grown up in Australia and has a very good rugby league pedigree, following in the footsteps of his dad Steve, and his uncle, my assistant Gary.

“He has played at a high level over in Oz as a junior before joining the Navy, and has represented the National Armed Forces team.

“He has come across to England to try and establish himself in the professional ranks, and can play half back, hooker or full back.

“From what I have seen of him so far, he has plenty of his dads and uncles attributes, and being very confident in his own abilities, I’m sure he will be pushing forward to establish himself in the team.

“We are building some genuine competition for places across the board and with Jakes utility value, this puts pressure on a lot of players in the squad.”

Jake was delighted to have the opportunity to move to the UK to join the club for pre-season; “I am extremely grateful that Hunslet have given me this opportunity to be a part of the team in 2018.

“I have followed English Rugby League for many years in Australia and admired the physical game they play.

“When Gary Thornton contacted me about the possibility of playing for Hunslet this season I didn’t have to think twice about coming over.

“The coaching staff have put together a great squad and are very confident in our ability. I am excited to start pre-season with what I already know is a talented group of players and I am sure we will have a successful 2018.”

To sponsor Jake in 2018 email darren.williams@hunsletrlfc.com