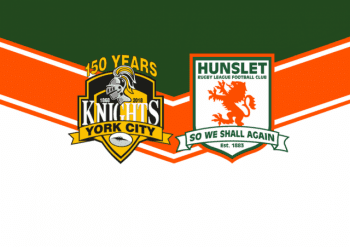 Hunslet RLFC will kick off their pre-season schedule with a ‘friendly’ against close rivals York City Knights at Bootham Crescent on Sunday, January 28th, 3pm Kick off

Hunslet games against our friends from York are always keenly contested and this occasion will be no different, as players stake their claim for a shirt against Hemel in round one.

Hunslet Head Coach Gary Thornton – who is no stranger to the Knights – is looking forward to the challenge: “We want to challenge ourselves in pre-season and in the warm-up games, to give us a good platform for the first league game in February, and to measure our progress towards the season start, so York away will be a great test for us.

“They will definitely be one of the teams up there come the end of the season, so it will be a good early hit out against a well prepared team. I’m sure the players will be chomping at the bit come January to get a game under their belts after a gruelling pre-season.

Knights Head Coach James Ford said: “Playing Hunslet at Bootham Crescent is a great way to round off our pre-season programme. The boys will be looking lay down a marker of where we’re at in terms of competing against a well drilled team who will be right up there with us in challenging for promotion this year.

“We have a competitive squad of players and everyone will get an opportunity to prove themselves in the warm-up games, and with some tough games scheduled in, they will have every chance to claim a shirt for opening game against Bradford Bulls.”

“I’d like to thank the Hunslet club for travelling to York – I’m sure we’ll put on a good show for the fans.”

Tickets for the game will cost just £10 adults, £5 concessions and – as ever – completely free for children under the age of 16.