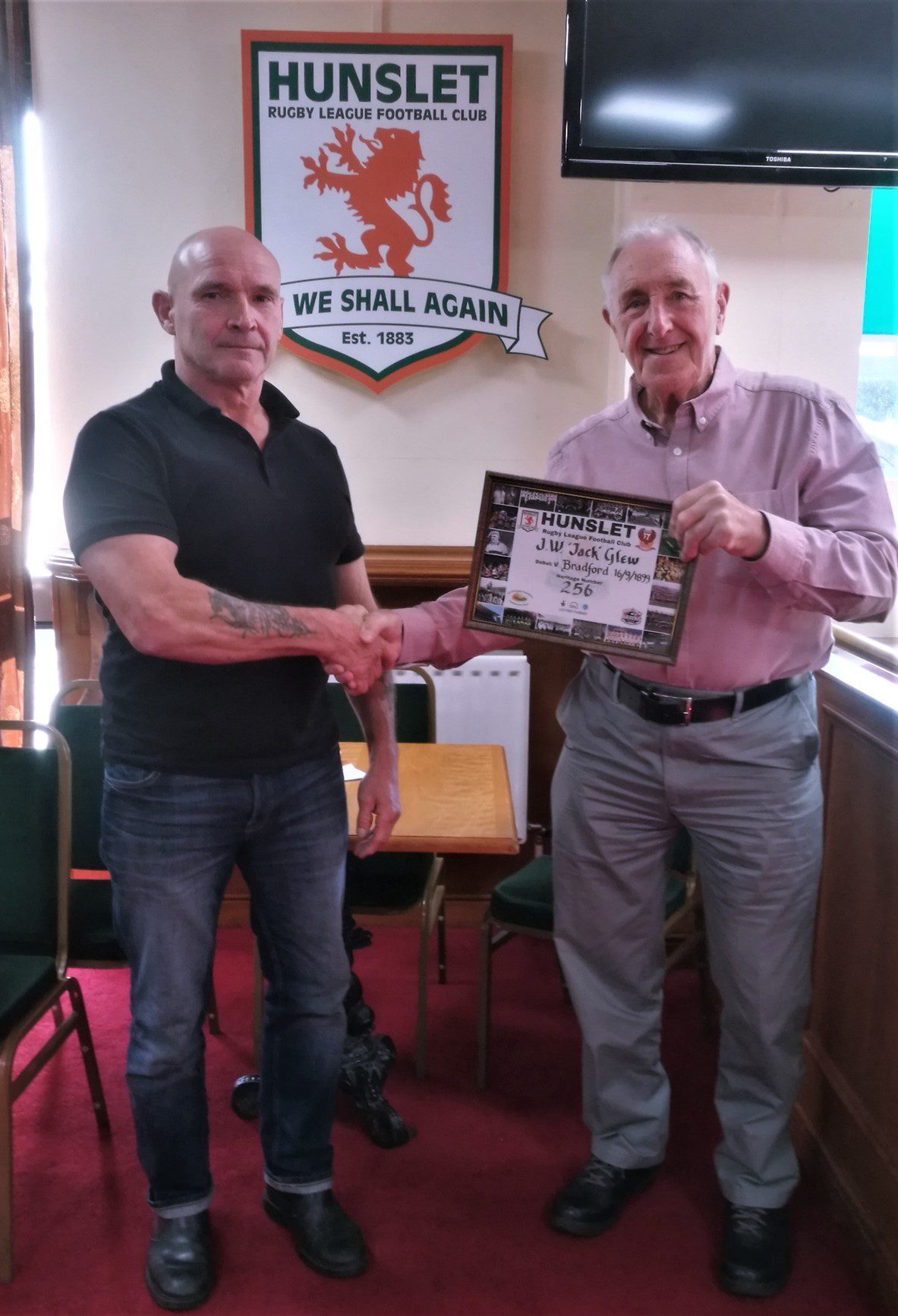 These players were early teammates of the great 1907-8 team All Four Cups team, helping build Hunslet’s reputation, though neither was with the club long enough to enjoy the renown they deserved.

‘Jack’ JW Glew transferred from Bramley in 1899. He’d signed on at Barley Mow in October 1897, making his debut as a forward against Castleford. His fulltime job was as a hewer of coal in the Knottingley mines, so

he would clearly have had strong shoulders from wielding a pickaxe all day. For Hunslet, he played seven seasons to 10 March 1906, playing 205 games and scoring five tries. His debut had been against Hull KR on 16 September 1899. His consistency and strength are epitomised by his playing 37 out of 38 games one season.

Glew played in a 1903-4 Challenge Cup semi-final against Halifax, when 21,000 spectators were present. Those were the days!

Ken Glew, Jack’s great grandson, received his Heritage Certificate (no 256) on behalf of the family, and spoke of the pride he felt for his ancestor and also the sadness of his uncle Darrell, also present, that the family no longer had Jack’s cap for Yorkshire, nor his medals, nor his photograph of Jack with Randall, Jukes, Brookes and Walsh.

Allan Tunningley came down from the Lake District for this special presentation. His ancestor, Tom Tunningley, born 1880, had made his debut for Hunslet on 1 September 1900 against Batley. Another Knottingley man, Tom played for Yorkshire against Cumberland and Cheshire in the 1902-3 season. His three seasons ended on 13 April, 1903 in unfortunate circumstances. He was a keen pigeon fancier and

collected his racing bird as it landed in the pigeon loft. Grabbing it, he rushed to the timing clock, only to slip on the shed steps, landing on his chest. He managed to time the bird, but just a couple of months later he was dead, officially of consumption, but likely of internal bleeding in his lungs due to the fall. Thank goodness for the NHS and penicillin. Tom’s Heritage Number is 271.

Tom’s record for Hunslet is 77 games and four tries. Glew and Tunningley played in several matches together, including the 1901-2 cup match against Broughton Rangers – then the top team – whom they beat, only to lose in the next match at Wakefield in front of 15,000 spectators.

As an example of how fit these players were, on Christmas Day 1902, Hunslet played at Halifax and won 4-3. On Boxing Day they played Bradford at home and won, then on the next day, 27 December, they played Batley. Not surprisingly, they lost that match. We can be pretty sure that Glew and Tunningley knew each other and travelled together from Knottingley to Parkside.

And So We Shall Again!