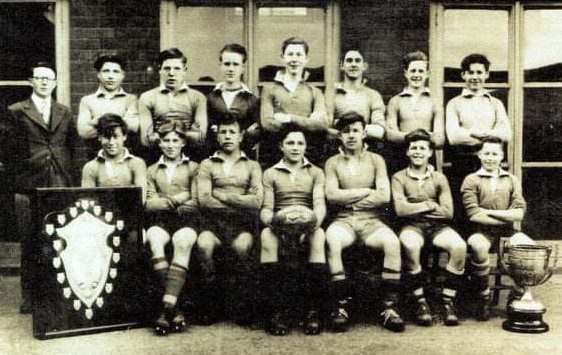 The Hunslet Breakfast Club (Every Friday 10am till 12noon in the Phoenix Bar, South Leeds Stadium) is a great place to reminisce and to listen to other people’s memories. Often the conversations turn to school days and the pride that youngsters had (and older men still have!) in representing their school sides, and in some cases Hunslet Schoolboys, “back in the day”.

Photographs often accompany these memories, and one such was brought along by Jack Firn to show to his former Middleton School team-mate, from 1950-51, Bernard Shooman.

Although the photograph was professionally taken by Scholastic Souvenir Co Ltd of Blackpool, neither Jack nor Bernard could remember it being taken. However, between them, they could name all the players on the photograph, as well as recalling matches played and trophies won. The trophies on display are the Harrison Shield (Senior League Championship Trophy) and the Lewthwaite Cup (Senior Knock-Out Trophy). Middleton were the outstanding team from south of the river in the immediate post-war years, winning the championship six times and the cup four times in seven seasons.

Jack (front row, second left) went on to play for the Hunslet first team, as did Colin Byrom (back row, next to coach). Meanwhile Bernard (back row, middle player) progressed into the amateur game, as player and coach, and served in various roles in the professional game, including as a senior referee.

Both Bernard and Jack are regulars at the Breakfast Club, which takes place in the Phoenix Bar on a Friday morning, from 10 am; for £2 you can have a bacon or sausage sandwich and as much tea or coffee as you can drink. What’s more any newcomers can be assured of a warm welcome; even more so if you bring along your own photographs, memorabilia or simply memories to share.

More information about the history of schools’ rugby league in the city, can be found on the official website: https://leedsandhunsletsrl.wixsite.com/mysite-4

On Sporting Heritage Day – Thursday 30th September 2021, 6pm Hunslet RLFC will be holding an online reminiscence session, more details regarding this event will be available shortly. Steve Boothroyd has been confirmed as the club’s first special guest at the event. It will be free of charge, places available on a first come first served basis and anyone attending will be encouraged to share their Hunslet RLFC memories and also listen to others.