Author John Rigg looks back at the Heritage Room launch 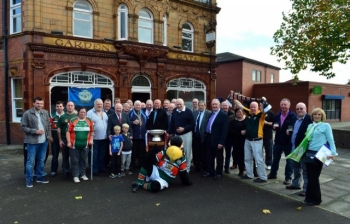 Last Friday lunchtime, the “Hunslet Rugby League Remembered” Heritage Room was officially opened at the Garden Gate public house in south Leeds. I had received an invitation from Peter Todd, the General Manager of the Hunslet Hawks RLFC, who has also previously been kind enough to stock copies of An Ordinary Spectator: 50 Years of Watching Sport in the club shop.

The room is dedicated to the history of the Hunslet Rugby League Club and contains some neatly presented display boards containing descriptions and photographs of the key events in the club’s history from its formation in 1883 largely through to the disbanding of the original club – and the sale of its Parkside ground – in 1973. There are special features on Alan Snowden, the club’s record holder for the number of tries in a season (34 in 1956-57), and Billy Langton, the club’s record points scorer (2,204 between 1954-65).

The Garden Gate is an appropriate venue for the Heritage Room. It was built in 1903 and, since the 1970s, its status as a Grade II listed building has thankfully preserved it from the urban planners and developers. Moreover, I was told, it was the hostelry in which the Hunslet team gathered with their supporters to celebrate the completion of their “All Four Cups” feat in 1907-08. There is a main bar and three other small rooms – one of which is the Heritage Room, another containing the piano, the third on this occasion used to dispense the lunchtime pies and peas – connected by a narrow corridor. I sensed that, according to circumstances, it could be a place for both communal festivity and private discourse.

I was aware that, previously, I had had only brief acquaintance with a couple of people at the event and would therefore be faced with the tricky task of striking up conversations with folk who were already well-connected within the group. I need not have worried. The first person I met was Keith Rowson, who played for the Hunslet first and reserve teams in the 1960s. He greeted me by the entrance and we immediately struck up a friendly conversation.

As we waited in the sunshine, Harry Jepson arrived. This remarkable man, now aged 94, is the distinguished President of the Leeds Rhinos RLFC and a former Secretary/Manager of Hunslet. I introduced myself by saying that I had sent him a copy of An Ordinary Spectator and that I had been very touched by the warm letter that he had sent in reply. He placed me instantly and we had a nice chat. In his letter, he mentioned that he had first watched Hunslet at Parkside as a young boy in 1926 and had been instantly “hooked” on the club and the sport. He smiled when someone asked if he had been present for the Hunslet’s team triumphant homecoming in 1908.

There was a consistent warmth of greeting from everyone I met. I kept my introduction short: “Hello. My name is John Rigg. My father brought me to watch Hunslet play at Parkside when I was a small boy”. “Hello, John” responded Ray Abbey, a reserve member of the Challenge Cup Final squad of 1965, with a firm handshake and a friendly nod of the head. Next year is the fiftieth anniversary of that match, of course, and I wondered if any special commemoration was being planned. Ray Abbey counted through the squad on the fingers of his hands: 8 members are still alive, though sadly not all are in the best of health.

Earlier, after my nervous approach and introduction, a similarly friendly response. “Hello, John” said Geoff Gunney, with another handshake and warm smile. Geoff Gunney: a Great Britain tourist to Australasia in 1954, the winner of 11 international caps, a Wembley finalist in 1965, a driving force behind the establishment of the New Hunslet club in 1973. And also – with apologies to the advocates of Albert Goldthorpe and Jack Walkington – arguably Hunslet’s greatest-ever player.

The short official opening speech was given by Peter Jarvis, another former player at Parkside and chairman of the Hunslet Rugby Foundation heritage group. He concluded by leading a rendition of the traditional Hunslet club song: “We’ve Swept The Seas Before Boys”. This was a poignant moment. As I joined in from my position in the crowded corridor, the sounds of the verse coming from each of the rooms and from those placed back towards the entrance to the pub, I thought of my late father. He had been born in Hunslet and, like Harry Jepson, had formed an emotional attachment to the club in his childhood that stayed with him throughout his life. Peter Todd might have addressed his kind invitation to me, but I was there representing my dad as well.

I reflected on the concept of the Heritage Room on my journey down to London on Friday afternoon (prior to returning to Glasgow on Saturday). For the individual Hunslet players and officials – past and present – I would imagine that it contributes towards their individual senses of personal identity: of who they were and are. Linked to that is clearly an already well-established sense of comradeship and bonding that many of those players have with their former colleagues: those who, at one time, were with them in the mud and rain at Batley or Hull or Whitehaven.

Perhaps most important, however, is the Heritage Room’s role in the Hunslet community, hopefully not only as a locale to celebrate the past achievements of the area and its inhabitants but also, crucially, as a venue from which current and future generations can take inspiration to make good, if not in sport than in some other field. The best – and most interesting – heritage centres are those that not only describe and interpret the past, but also provide insights on the present and suggest pathways for the future. It does not take a genius to realise that the future of the Hunslet Hawks RLFC is critically dependent on the maintenance and development of strong links with the local community. The club is already devoting significant efforts towards this. At the same time, the firm link with the past also remains: the last line of the club song – “So We Shall Again” – appears on the Hawks’s crest.

At present, the Heritage Room occupies a relatively small space. My personal view – without wishing to push the religious analogy too far – is that it would benefit from having a few more “relics”. The presentation of physical objects – in this case, a shirt, a match programme, a pair of boots – can greatly assist in the presentation of historical narrative. I realise, of course, that this creates a separate set of issues to address, not least those concerning security, insurance and storage.

Peter Jarvis is ahead of me on this, however, and already thinking along the same lines. The Yorkshire Evening Post’s report on the Heritage Room’s opening included a request from him to the public to donate memorabilia to add to the collection. I do hope that his appeal is taken up, that the collection expands into a second room at the Garden Gate, and that the efforts of the Hunslet Rugby Foundation heritage group in establishing the Heritage Room are fully rewarded.

For more information on John Rigg and his work click here