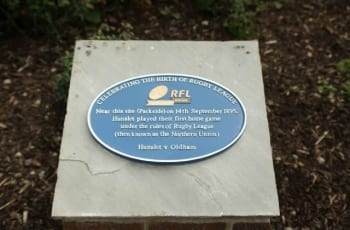 I was at the South Leeds Stadium on Sunday (20 September 2015) for the unveiling of a plaque to commemorate a piece of history in South Leeds – the first home game played by Hunslet under Northern Union rules, later to be known as Rugby League.

A member of the RFL delivered the opening speech of how the game evolved from there. Former Hunslet player and coach Peter Jarvis responded on behalf of the club, before he and Councillor and Hunslet Director Kim Groves unveiled the plaque with captains of both Hunslet and Oldham in attendance in specially made replica jerseys that were worn 120 years ago.

The two teams, Leeds Masters representing Hunslet and Crosfields Masters then recreated that original game before enjoying their refreshments. Carl Wilson, a lifelong Hunslet supporter enthused about the game and his own pride at captaining the Hunslet team on the occassion.