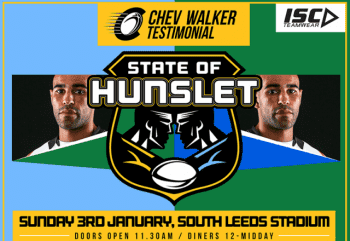 On Sunday 3rd January we celebrate the career of Chev Walker in the inaugural State of Hunslet Testimonial celebration event which will be played at South Leeds Stadium.

Walker retired at the end of the 2015 season but enjoyed a fantastic playing career playing 300 games for Leeds, Hull KR and Bradford respectively, winning the 2004 Grand Final and 2005 World Club Challenge with the Rhinos.

It all began for Chev at Hunslet as a junior and this day will be a celebration of his career and will also provide the Hunslet area with a lasting legacy and an annual celebration of what people raised in Hunslet can achieve.

With doors opening at 11.30am, the first match kicks off at 1pm as Hunslet Hawks Legends take on the Rugby AM Legends. Steve Pryce, Jamaine Wray, Mick Coyle, Latham Tawhai, David Plange & Richard Pachnuik have been confirmed for the Hunslet legends, while the likes of Robbie Paul, Keith Senior and Paul Sculthorpe will play for Rugby AM.

At 2.15pm the crowd will see potential stars of the future take to the field as Hunslet Club Parkside under 7’s take on Hunslet Warriors under 7’s, while the under 8’s also go head-to-head.

This all leads up to the main event at 3pm as the two great rivals, Hunslet Club Parkside and Hunslet Warriors, face off in a full-blooded no holds barred match with the winners being crowned the inaugural State of Hunslet Champions.

There is a unique feel to the game too with both teams granted four marquee players, with Chev playing for the Warriors, the team he represented before he turned professional. The other big names will be announced in the coming weeks.

Referees for the day will be the vastly experienced Tony Martin and Ben Thaler, who officiated both the Challenge Cup Final and First Utility Grand Final in 2015.

Tickets for the day are priced at just £10 for adults and £5 for concessions, they can be purchased from www.hunslethawks.co.uk/store/tickets or from the ticket office at South Leeds Stadium.

If you want to watch the game in style you can enjoy a two course meal as well as pre and post-match entertainment for just £30 per person. That means a table for 10 would cost just £300 + VAT!

For more information on this or for any questions about the first ever State of Hunslet please email darren.williams@hawksrl.com or call 07880 574789 Get down and make it a day to remember as we celebrate the career of the legend Chev Walker.