Friday Night South Leeds Stadium was the place to be 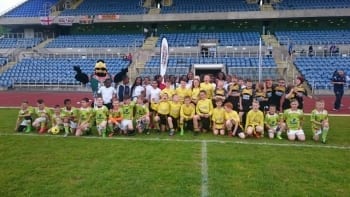 Friday night the South Leeds Stadium was the place to be, Leeds Irish Clovers U10’s and King Cross Park U10’s treated us to a very exciting game with very little to choose between the teams with players from both teams demonstrating team work with fierce defending and great skill in attack. On the other half of the field we had Beeston St Anthony’s playing tag rugby against Beeston St Francis, this was fast and played to a good standard with players showing great speed and athleticism, real end to end stuff. All the players, parents and staff had a great time with one of the highlights being the chance to meet some of the Hunslet Hawks players before the Halifax game.

We also had an U7’s team from Oulton Raiders who were here to escort the players onto the pitch for kick off and did a fantastic job. The Oulton players also had the chance to meet head coach Barry Eaton and ask him some questions although not all rugby related! Overall everyone had a great evening and we look forward to seeing them here again soon.