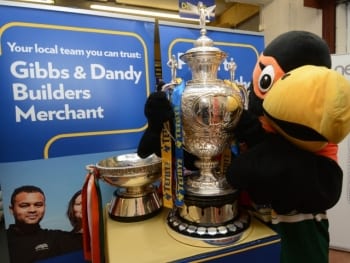 Harry the Hawk swooped in to visit the Hunslet Hawks Community partner, Gibbs and Dandy, at their Pudsey depot.

Harry took with him the TWO trophies that the Hawks won in 2014, the Kingstone Press Championship 1 trophy, won after their Grand Final victory over Oldham, and also the Lazenby Cup, secured after their 20 points to 16 victory over Leeds Rhinos in January.

Davide Longo, the Leeds Rhinos Foundation manager, brought along the Challenge Cup. Harry searched on the list of winners for the names of Hunslet and Leeds which are engraved on the iconic trophy. He found Hunslet’s name in 1908, when they beat Hull by 14 points to nil, captained by the legendary Albert Goldthorpe, but couldn’t find Leeds’ name until a few years later. Nevertheless, he allowed staff and customers of Gibbs and Dandy to have their photograph taken along with himself and this old cup.

Darren Hoyland, manager of the Pudsey branch of Gibbs and Dandy and generous sponsor of both Hunslet Hawks and Leeds Rhinos, was a most welcoming host to both clubs.