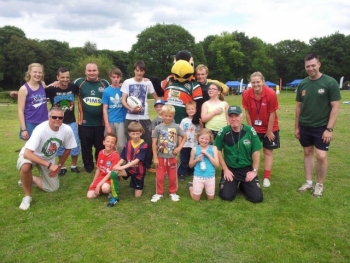 On Saturday Harry Hawk visited both the Hunslet Gala and the Middleton Sports Day.

At the Gala Harry met up with Fran McKnight and the Hunslet Hawks Dance Academy who were showing off their dancing skills. Fran said that she was delighted with the performance that her dancers put on to entertain the big crowd. “The girls have worked really hard to prepare for the Hunslet Gala and all their efforts have paid off with a superb performance”, was how Fran summed up the morning. Hunslet Hawks Patron, the RtHon Hilary Benn MP, was also present to see the performance.

After the show, Harry wandered around all the stalls and activities that were on offer before meeting some of his distant cousins, in the shape of Dennis the Dragon and Sammy the Snake.

In the afternoon Harry travelled up to Middleton Park for the Middleton Family Sports Day, where he was joined by Hunslet volunteers to take part in various activities, including netball, tennis and, of course, rugby, where he showed off his skills. Unfortunately, his exertions and the hot weather meant that he was unable to take part in the rounders and the fun run that followed, although the other Hunslet representatives did complete the course.