Head coach Thornton humbled by Hunslet’s away support in Canada 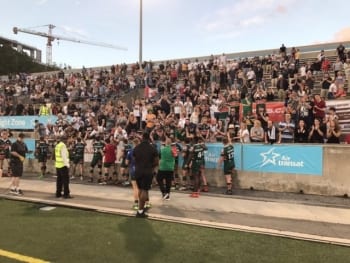 Head Coach Gary Thornton has paid tribute to the “amazing” fans who travelled to Hunslet’s historic fixture in Canada.

Around 150 Hunslet supporters saw their team go down 56-12 to Toronto Wolfpack at Lamport Stadium on Saturday.

“Our support was unreal,” Thornton said.

“When we came out of the changing rooms you’d have thought we were the home team. I was humbled by it, it was absolutely fantastic and it spurred the boys on a bit and gave them some extra inspiration, the fact those people had made such a massive effort.”

Of Hunslet’s performance against the unbeaten Kingstone Press League One leaders, Thornton said: “We played well, especially in the first half.

“There was only a 10-point deficit at half-time and we did ourselves proud. We set a target to score as many points as we could and keep them below 50 so we were disappointed the scoreline blew out a bit, but they are very good and very fit. Their coach Paul Rowley said we were the best team they’ve played over there and we were pleased we gave them a run for their money.”

Jose Kenga was concussed during the game and needed hospital treatment. Thornton will also check on Tommy Brierley, who hyper-extended an elbow but is expected to be fit for Sunday’s visit of Coventry Bears.