Hunslet Hawks meet with representatives of the Ultras supporters group 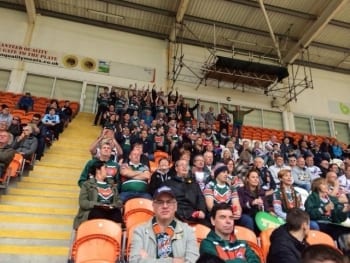 Following recent incidents in the Phoenix Bar after home games a group of supporters, known as the Ultras, approached the Club with a view to having a “clear the air” meeting.

The meeting was productive and the Club would like to thank the Ultras for their collaborative approach to resolving the issues. The following principles were agreed:

• The Club will introduce a fans code of conduct which will be initially trialled by the Ultras in the last two home games of this season. A key element of the code will make clear that foul and abusive language whether in chants or otherwise cannot be tolerated. The Club will make clear what actions it will take if the code is not upheld. If this is successful the Club will look to introduce it for all fans from 2016. We will publish the proposed code and consequences of non conformance shortly. We do not see this impacting in any way on the vast majority of our fans but will give us an agreed and published strategy to handle inappropriate behaviour.

• The Club will support the setting up of a Fans panel which will be representative of the whole fan base and not just the Ultras. Phil Hodgson will lead on this on behalf of the Board and further communications will be issued shortly. The intention is to offer this panel a monthly meeting with members of the Board in order to create a regular dialogue between the Club and its fans.

• The Club will hold quarterly Q&A meetings for HIST members.

• The Club will aim to issue regular updates to keep fans informed of key issues from squad injuries to wider business related matters subject to personal or commercial sensitivities.

• The Club will retain the current after match awards presentations but this will not offer the opportunity of any Q&A which will remain the purpose of the monthly and quarterly meetings.

• The Club will review the stadium seating plan at the end of the season to look at creating designated areas for families and for those fans who want to sing and chant through the game.

In addition to this, as announced in the Chairman’s last programme notes, the Club will hold a HIST members meeting where we will set out the benefits of our current partnership with Leeds Rhinos to hopefully provide a greater understanding of why we continue to use it. The meeting will also cover the current financial position and provide details of our ongoing work with the Community and Leeds City Council and the need for more volunteers.

That meeting will take place in the Phoenix Bar on Tuesday 6th October at 7.30pm. I would urge all members to attend and anyone who is not currently a member can join for a fee of £15pa. We anticipate a high turn out for the event and will issue further communications requesting those attending to let us know in advance so we can have the room laid out to best effect and help manage expectations.