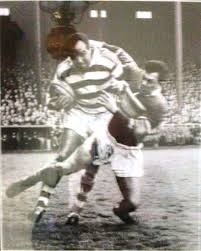 The club is saddened to hear of the passing of Alan Preece who has sadly died, aged 75 after a long battle against illness. Our thoughts are with his family at this sad time.

Alan was is a legend of the Hunslet club, he spent the majority of his career south of the River Aire playing for Hunslet, he played for 14 seasons and made nearly 400 appearances, scoring 84 tries. He then moved to Headingley in the early 1970s as a player-coach at the Leeds club.

He was a founding member of the Hunslet RL ex Parkside Players Association, which was formed in 1973, just after Hunslet’s last game at Parkside in 1973. The purpose of which was to have an annual get together of all the former players who had represented Hunslet professionally at Parkside.

Former Hunslet stalwart and now Leeds President Harry Jepson OBE remembered Alan fondly, he recalled, “Alan was in the group in 1971 that went to Wembley but he didn’t play in the Final. He came to Leeds after Hunslet crossed him off in 1970 as player coach of the A team, who he coached for three years. When Eric Ashton came in 1973 he promoted Alan to assistant coach of the first team such was his respect for him and the high regard in which he held him.

“He was a very popular character at both clubs and throughout the game. He left Leeds in 1974, and went on to be a successful landlord of five pubs including The Mexborough on Chapeltown Road. It is a great tragedy what has happened to him especially the last part of life which was blighted by ill health. He will be fondly remembered by all who knew him.”