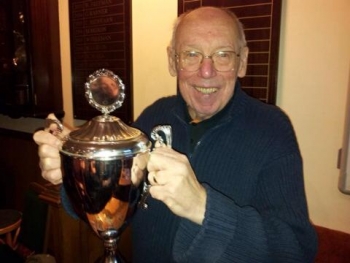 The club would like to pass on our deepest condolences to the family and friends of life long supporter John Hodgson who passed away on Tuesday night following his battle with cancer.

Over the years John performed various voluntary roles with the club from pools officer at Greyhound Stadium to collecting HIST memberships in the Phoenix. However, his proudest moment involved being secretary of the colts team that won the cup against Hull KR in 1983.

Despite his illness John still managed to get to most home matches this season and is pictured below in celebratory mood with the Lazenby Cup following this year’s victory over the Rhinos.

His funeral takes place on Wednesday 3rd September at Cottingley Hall Crematorium at 13.40. All friends and family are invited to The Whistlestop pub in Beeston after the service.