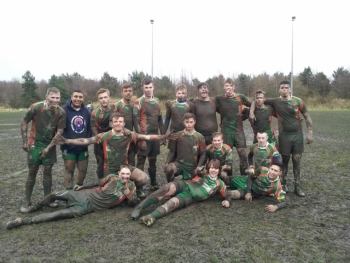 Leeds Building College battled their way to a much needed victory Wednesday 5th January at home. York College came to South Leeds Stadium confident playing on the back of a win, which was evident from the start. Leeds Building College were up for the game too but started slowly conceding a try in the first five minutes. However after some great attacking play pressuring York’s defence for a sustained period a try came through Kieron Roach who side stepped his way through York’s weary defence 20 meters out.

Leeds Building College with points on the score board were confident and came back strongly in defence keeping York out for the rest of the half with impressive defensive efforts from Jumel Henry, Jonathon Wood and John Pollard setting the level for the rest of the team to meet in defence. Leeds Building College ran in a few more tries one of which coming from a great lone drive by Ethan Mccori.

The half time whistle came with Leeds Building College on top, they began the second half as well as they finished the first with an outstanding kick into the corner by Liam Gaunt which was plucked out of the air by centre Joe and carried over the line for a try. The building college were comfortable but to the back end of the half slowed their pace with fatigue setting in due to the harsh conditions and the hill. Building College switched off and let York cross their line twice through poor defence. The game finished 40-20 and was a great performance by Leeds Building College which will provide much needed confidence for next week’s fixture against Huddersfield.