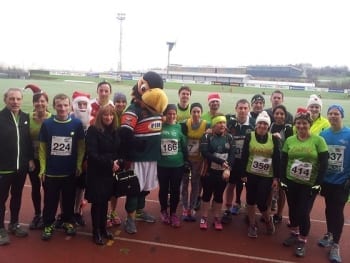 Sunday saw the Hawks play host to over 350 runners who braved the arctic weather and falling trees to complete the Leeds Xmas 10k.

The event is now in its fourth year and is fast becoming a firm favourite with athletes and fun runners alike. This was the first year we have been involved and the feedback from the FairPlay Events (the organisers) and runners has been tremendous.

As ever Harry the Hawk proved a firm favourite as did club directors Kim Groves and Peter Jarvis, who presented the winners with their trophies in the Phoenix.

The race was won by Ben Douglas in an amazing time of 34:27 mins. Unfortunately non of the many Hunslet supporters running managed a podium place but there is always next year.

The Club would like to thank the legion of volunteers who ensured a great day was had by all.